“A board for Capernaum”- fundraising campaign for the town of Jesus 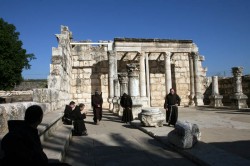 The idea was born more than a year ago, from the need to decide on a new pavement to be placed at the center of the archaeological site of Capernaum, among the excavations in the city of Jesus along the shore of Lake Tiberias (also known as the Sea of Galilee). The ideal material for adorning the path through the area, which is managed by the Franciscan brothers pursuant to an agreement among the Custody of the Holy Land, the Italian Province of Trento and the Consortium of Albiano (Italy, Trentino Region), was quickly identified: porphyry from the Trentino region in Italy.

And while waiting for the paving stones to arrive in the Holy Land – 2,500 cubic meters of so-called “red ore” will be used for the new pavement within the restored archaeological area – Father Pietro Kaswalder, a Franciscan of the Custody who comes from Roveré della Luna in the Italian Trentino region, has launched a new initiative. After Trentino porphyry, wood from the Alto Adige (which together with Trentino forms the Trentino-Alto Adige Autonomous Region in northeast Italy). “Once the stones have been laid, we will be able to move on to the second phase of the works, wood coming from the Alto Adige”, explains Father Kaswalder. In collaboration with the Cassa Rurale (local credit bank) of the region, and assisted  by the architect Pedri di Salorno, this past summer a fundraising campaign entitled “A board for Capernaum” was launched to finance a number of wooden walkways which will permit the many pilgrims, who each year visit the site, to enter among the archaeological remains of the city of Jesus.

It should now be only a few weeks before the porphyry arrives, and a few months before the final approvals are obtained which will allow the works to begin. The Capernaum project, sponsored by ATS pro Terra Sancta (the nongovernmental organization of the Custody of the Holy Land), entails a wide-ranging restoration effort. It is part of a general cultural program launched by the Custody of the Holy Land to promote a documented knowledge of the history of Christianity in the Holy Land, and to provide information on the Francisan presence and the works currently being carried out by the Custody, not only in Capernaum but also in Jerusalem and Nazareth.

Additional information on the project, “Capernaum, the city of Jesus”

Other news about cultural projects (in chronological order)

Telling the Story of the Holy Land: The activities for the creation of a museum center in Jerusalem are continuing (November 2010)

The Custos of the Holy Land speaks of the project “Jerusalem, Stones of Memory” (November 2010)

Official handover of new houses to Christians in Jerusalem (September 2010)

Support the Holy Places and the Christian presence in the Holy Land!

You can support the project by a donation:

Christmas 2010: the message of the Custos of the Holy Land Father Pierbattista Pizzaballa