“Through the eyes of the Apostles – A presence which overwhelms life”: the exhibition at the Rimini Meeting on Jesus’ life at Capernaum 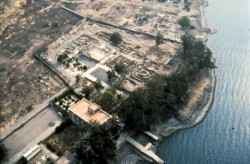 The inauguration of the exhibition on Jesus’ life at Capernaum, “Through the eyes of the Apostles – A presence which overwhelms life” will take place at the upcoming Rimini Meeting. The exhibition represents one of the principal events of the 2011 edition of the noted festival to be held in Rimini from 21 to 27 August.

The ancient village of Capernaum, on the shore of the Sea of Galilee, was the place of Jesus’ public life, the site of the meeting with his first disciples. It represents today a precious Holy Place and an archaeological site of great importance that is maintained by the Franciscan friars of the Holy Land.

Four different excursions through archaeology and the Gospels will take the visitor back through time to rediscover the historical fact of Jesus and the great impact that he had on the life of the village of Capernaum, which continued even in the centuries following his death. The aim of the exhibition is to demonstrate that “this really did take place. Jesus is not a myth, but a man made of flesh and blood, a very real presence in history. We can visit the places and follow the roads that He himself traveled. We can, through His witnesses, hear His words. He died and rose… the myths were waiting for Him, in who desire became reality” (Benedict XVI).

The exhibition, produced with the support of the Custody of the Holy Land, is being carried out through the collaboration of ATS pro Terra Sancta and numerous experts and friends, under the direction of its curator José Miguel Garcia, Professor of New Testament Exegesis at the San Dámaso Faculty of Theology in Madrid.

The Custos of the Holy Land has been officially invited to present the exhibition during the week of the Meeting. The event will be held on Wednesday 24 August 2011 at 17.00, with the participation of José Miguel Garcia, the exhibition’s curator.

We invite you to the session with Father Custos and we look forward to seeing you  throughout the week at the exposition with the staff of ATS pro Terra Sancta and numerous friars of the Custody of the Holy Land.

Cyprus: scholarships and new initiatives to support Christians in need on the island