Jerusalem, stones of memory: how your contributions are being spent - Pro Terra Sancta
Uncategorized

Jerusalem, stones of memory: how your contributions are being spent 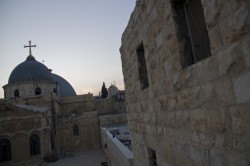 How your contributions are being spent: an interview with Ettore Soranzo, an engineer with the Custody of the Holy Land

An ambitious and long-term project for the complete renovation of an additional 400 housing units located within the Old City of Jerusalem: Jerusalem, Stones of Memory, an initiative launched by the Custody of the Holy Land and its NGO ATS pro Terra Sancta aimed at supporting the Christian presence in the Holy Land. A project of critical importance for preserving and maintaining the living stones in Jerusalem and the Holy Land – but at the same time a difficult one, as the homes are in constant need of repair. Ettore Soranzo, head of the Technical Office of the Custody of the Holy Land that manages construction activities in the Old City, explains in an interview what has been achieved through the generous contributions of private and institutional donors.

What types of works have been carried out in the house in the Old City?

There are several basic types of works. First, in some case renovations may be required to restructure units or to expand ones vacated by a family to accommodate a new one, this can also include moving walls. There can also be work to bring up to norms units with health and sanitary problems due to leaks and dampness. Finally, we spend a lot of time on regular maintenance works to maintain the value of the property and avoid future damages, and special maintenance works, to preserve the value of the property and to deal with emergency situations, such as the risk of collapse, water loss from pipes, electrical problems.

What are the objectives of such works?

We want to help the Christian families in the Old City who need a new home or more space, and to provide families who are already living there better health and sanitary conditions – this also allows us to regularize the contractual situation of those who have been unable to register their contracts because the properties did not meet the norms – and finally to preserve the value of the buildings and their structural integrity, all the while trying to foresee future problems that if dealt with only at a later stage may be both more difficult and costly to resolve.

How much do such works cost?

The renovation of housing for the Christians is an activity in which the Custody has traditionally been involved: works have been carried out each year as a function of the available budget. However, the amounts available for such works have frequently been limited, and in the past two decades large investments have been made for building new condominiums in Bethlehem, Bethpage, Bethany and Beit Hanina, while the Old City has been somewhat neglected. In 2007 the Custody of the Holy Land recognized that the situation in many homes had become extremely precarious and in some cases critical: this led to the decision to give a new impulse to the works in the Old City. Since September 2007, the Custody has invested approximately NIS 9.9 million for renovating 97 housing units, and about 1.6 million for renovating the external surrounding of a dozen buildings.

In recent years it has been decided to improve the method of working through the project “Jerusalem, Stones of Memory” …

In September 2009 the Custody of the Holy Land took the decision to carry out future works using a range of more efficient methods, and created an internal team of 20 workers, all from the West Bank and East Jerusalem, having the required specializations for carrying out all the various types of construction works. This includes tilers, painters, electricians, plumbers, plasterers, a chief craftsman and a pair of architects for the project design and documentation, and for directing the works. The workers undergo continuous training through courses, and the works are carried out entirely by the Custody of the Holy Land’s team, without any external contracting-out. In this way, the skills remain internal to the team, the materials are of certified quality since they are acquired directly by the Custody of the Holy Land and not furnished by contractors, and the profits that are generated are reinvested. In other words, the entire budget is used for construction works and for supporting 23 Arab families through the employment of workers and professionals.

During the course of 2011 works are planned on about 30 housing units. Then there are other specific projects that are financed by private and institutional donors, such as the work financed by UNESCO on the outer shells of about nine buildings, and the work on a very large number of bathrooms in individual housing units. The most urgent works with which we have to occupy ourselves, subject to receiving sufficient donations and external contributions, are repairing the outer shells of a number of buildings – facades and roofs in particular – which frequently have cracks that lead to serious water leaks, repairing bath rooms and plumbing in general, which is often in a very deteriorated state, treating rooms in which dampness due to rising damp or leaks has led to mold and mildew and plaster falling off, and modifying the internal spaces in units where a new family is replacing a previous one, or in which a family no longer has sufficient space due to an increase in the number of children.

How much does each renovation cost?

Restructuring and making usable a bathroom costs about 1,500 euros, for an apartment about 20,000 euros. But these are only very rough figures, naturally it depends on the type of housing unit, its size, location and the particular problems that it presents.