A friar of the Custody on the Dodecanese 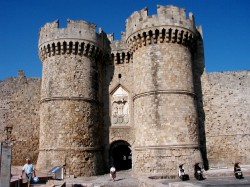 A friar alone in command.  That was the title of the article on “L’osservatore Romano” (The Roman Observer) about Father Luke, a Franciscan friar who has been living in Rhodes for 5 years now. He takes care of all the Latin parishes on the island. He celebrates about 10 masses a week for the 3000 Catholics still living on the island.  During the summer, he uses a Latin breviary to address all the tourists speaking different languages. This English friar, who lives practically alone (but helped – as he says – by a very efficient German bursar) on this beautiful isolated island, has found a way to be noticed. He is considered an example of the relation with the Orthodox of the island, and in a short time he has restored all the properties of the Custody of the Holy Land on the Rhodes and Kos islands, churches, chapels, convents and cimiteries. Almost all the work has been carried out with the contribution of qualified volunteers, whom he welcomed and motivated. Recently, also a small group of young volunteers in force in Jerusalem to promote the ATS pro Terra Sancta projects were lucky enough to be welcomed by Father Luke and meet the local community.

During this meeting, the volunteers offered their help to the Franciscan friar to design a new website about the Catholic life in Rhodes.

Today, following the task entrusted to him, he keeps welcoming those in need of help and rest. Trying to tell them some gospel.