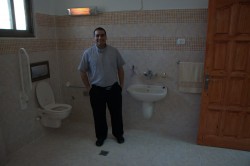 The project to aid the Christians of Gaza sponsored by ATS pro Terra Sancta continues to make good progress, thanks to the efforts of the parish priest and curate of the only Catholic parish in the Gaza Strip. The two Argentinean priests, who take into their own home youth with severe disabilities, are now coordinating a number of projects to rehabilitate and adapt the surroundings to the needs of people with disabilities.

Apart from acquiring medicines and medical equipment for rehabilitating those with severe disabilities, the Latin parish of Gaza City also needs support for refurbishing the apartment in which the youth are being taken in and cared for. Thanks to the assistance provided by ATS pro Terra Sancta, the bathroom in the apartment has been entirely refurbished and adapted to the requirements of people with severe motor disabilities. The project will continue with training for staff and families, in order to provide a better reception and an enhanced awareness of the requirements and the possibilities for effective aid for people with physical problems and motor or language difficulties. ATS pro Terra Sancta has for a number of months been supporting a project involving training sessions for teachers and parents organized by Sami Basha, a professor at the University of Hebron, in collaboration with the Catholic University of Milan and the Centro La Nostra Famiglia on the West Bank.

“Gaza Emergency: taking care of the neediest in the Holy Land”, is a project born from the desire to support the Christian community in Gaza, which has suffered greatly from the 2009 conflict, as well as from the long-term embargo that has severely restricted the entry of goods and raw materials into Gaza. The funds contributed by private donors and institutions will be used to support Christian activities of caring for the disabled, permitting in the first instance the refurbishment of facilities and their adaptation to the requirements of the disabled, the acquisition of medicines and medical equipment, and the treatment and care of emergency cases. In Gaza, ATS pro Terra Sancta is operating in two sectors, which you can support via online donation or bank transfer.

ATS Pro Terra Sancta supports the Christians of Gaza and the activities of the “Holy Family” Catholic parish since 2009, in the belief that, given the long and persistent conflict and “Operation Cast Lead”, support for the population of the Gaza Strip is of critical importance.

Other news about Gaza (in chronological order)

“A board for Capernaum”- fundraising campaign for the town of Jesus