Aleppo: “We have to rebuild everything, but we are not alone”

Aleppo was a great city, then came death and blood, and destruction. But there are also many signs of a great hope. Monsignor Abou Khazen, Bishop of the Latin Church of Aleppo, met the staff of the Association pro Terra Sancta. He spoke about one of the most destroyed cities in the Syrian conflict, now trying to rise up. In recent years, the story fo the city has also involved several friends and supporters. As Mons. stated: “Without you we would have not resisted.”

On what was called the “Silk Road” in ancient times, in the Saint Paul region, there was a rich city known for its beauty throughout the 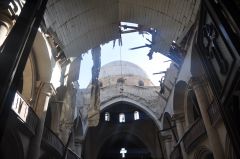 Middle East: Aleppo. Today much of it has been destroyed by the conflict in Syria, which has been going on for more than six years  now. The city has been freed in December, yet everything has to be rebuilt.

“Initially, during the first year of war, the militia had spared it. Then, they began to infiltrate slowly into the city. Untill they isolated it completely, cutting water and light. Soon sfterwards terror and destruction followed”. Its Msgr. Abou Khazen speaking, bishop of the Latins of Aleppo who met with the staff of the Association pro Terra Sancta in Milan.

He is happy to be here, he says, pleased to be able to know and thank those who during these years have helped the work of the Franciscans of the Custody of the Holy Land in support of the local population. “Without your help we would have not resisted” he says, moved.

Yet Bishop Abou Khazen does not just refer to the very important economic aid, “your closeness has been and is very important because we no longer feel abandoned. The Christians were about 180,000, already a minority and are now about 30 / 40,000. But we no longer feel a crumpled or persecuted minority, we are part of a large family that loves us and is close to us. This means a lot for us. So thank you. “

Today life has started flowing again in Aleppo, and among those who had fled, some are returning. But the wounds are still deep and it will take a long time to rebuild where possible. “With your help we have already started to rebuild some houses and apartments but we have more than 3,000 requests!” Also the  distribution of food parcels and medicines and the help to find employment for those who have lost everything, keeps on going. 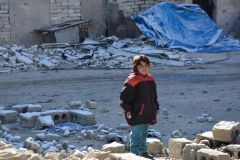 In addition there are about 6,000 children aged four that are abandoned among the rubble. Most of them are children of Jiihad women who came from abroad to be companions of fighters. “For society, they are a bad seed … No one wants them. But we are thinking of a way to do something” Bishop Abou Khazen said.

Still much suffering to endure, but Bishop Abou Khazen is confident, because besides the help there have been and there still are many testimonies of hope. That, for example, of the religious who have never left the country, “none of them”. Or the unity that has arisen between different Christian confessions or with Muslims in the so-called “blood ecumenism,” which is the only way to reconstruct now.

Help Aleppo to raise up now!