Art and solidarity: an exhibition in Bologna in support of the works of the Custody of the Holy Land in Syria 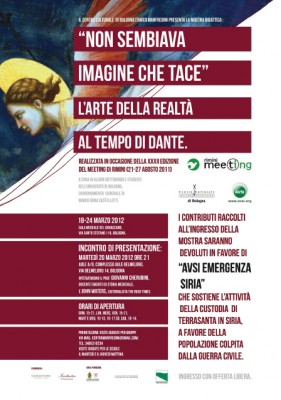 It is entitled “He did not seem an image that is silent. The art of reality at the time of Dante” − an informative exhibition prepared for the XXXII Rimini Meeting held in 2011, and now being presented at the “Enrico Manfredini” Cultural Center in Bologna.

The curators and organizers of the exhibition have decided to add an element of solidarity to the exhibition’s educational aspect, by donating all of the contributions raised during the exhibition in favor of Emergency Syria, in order to support the works of the Custody of the Holy Land in that country which now finds itself in the throes of a civil war.

Attached is the program!