ATS is celebrating its tenth birthday! An exclusive interview recounting the story of its birth and growth 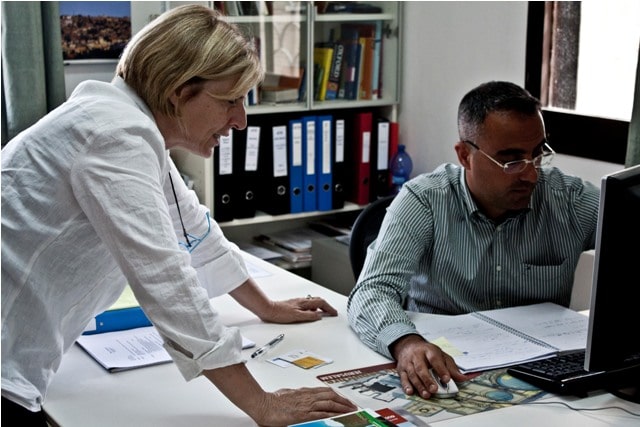 On 28 May 2002 the certificate of incorporation was signed for the newly created Associazione di Terra Santa (Association for the Holy Land). Ten years later, we present an exclusive interview with Carla Benelli – a collaborator with ATS pro Terra Sancta – who witnessed the birth of the Association and Tommaso Saltini – the current director of ATS pro Terra Sancta – who has contributed to its growth over these past ten years:

– Tell us about the creation of ATS pro Terra Sancta.

CARLA BENELLI: It was the beginning of 2001 and I was traveling with Father Michele (editor’s note: Father Michele Piccirillo, Franciscan archaeologist) and Osama (editor’s note: Osama Hamdan, an architect who works with ATS pro Terra Sancta) to Jericho. The three of us had already been working together for several years, and at that time we were monitoring a project to preserve mosaics in Hisham’s Palace and at the same time to train Palestinian youth in the restoration of mosaics. For this purpose we were dependent on an Italian NGO, but there were difficulties in managing the resources. I remember that one day, in the car on our way to Jericho, we were speaking of these difficulties and, almost as a joke, I said to Father Michele: “But why doesn’t the Custody start its own NGO”? I was convinced that the Custody could develop projects that would definitely qualify for receiving public funds, but to do this it would be necessary to provide it with appropriate instruments, and an NGO was exactly what was needed. Father Michele was an enthusiastic person, full of energy, and the very next day he visited a lawyer’s office to learn about the rules for setting up an NGO! We began to gather together and organize documents on the projects we had already carried out, through the support of other organizations and the Franciscan Archaeological Institute. These were all projects related to preserving the archaeological and cultural heritage, and to training local qualified personnel: two activities particularly dear to Father Michele and to us. In 2002 the statutes of the Association were signed, but its official recognition as an NGO by the Italian Ministry of Foreign Affairs only came much later, in April 2006.

– How did the Association evolve during these years? What where the key moments in its development?

CARLA BENELLI: During the first years, we continued to carry on activities using the tools we already had at our disposal. Father Michele received a lot of support from the Studium Biblicum Franciscanum and the Franciscan Archaeological Institute at Mount Nebo, two prestigious institutions that continued to provide technical support to ATS pro Terra Sancta until it was able to obtain official recognition as an NGO.

The year 2006, with the recognition of ATS by the Ministry of Foreign Affairs, was an important year. We began to work on a project in Syria for teaching restoration techniques and restoring the splendid mosaic of Tayybat al Imam, located not far from Hama. The project, the first to be officially presented by ATS pro Terra Sancta, was approved last year, but in fact still has not begun due to difficulties at the political level in Syria.

A further crucial step for ATS pro Terra Sancta took place in 2007, when Italian Development Cooperation entrusted us with the first emergency project for redevelopment of the historical center in Sebastiya. Italian Development Cooperation recognized the fact that Father Michele, Osama and I, while continuing to work for other institutions, represented the nucleus of a new NGO, ATS pro Terra Sancta, which was therefore in a position to directly receive funds for this project.

That is to say, Osama and I continued to work as external collaborators, while it was the friars, directly linked to the Custody of the Holy Land, who constituted the administrative center of the Association. In addition, Father Michele had envisaged ATS pro Terra Sancta as an instrument that could be activated and deactivated according to current needs: there was no permanent personnel, no one worked there full time. Thus, the arrival of Tommaso Saltini marked another important breakthrough: due to his continuous presence over a number of years in Jerusalem, ATS pro Terra Sancta was able to grow as an NGO, equipping itself with a real office (initially it had been based in Father Michele’s office), increasing from time to time the staff through qualified volunteers, and considerably broadening the scope of its activities…

– What can you tell us about that moment, Tommaso Saltini?

TOMMASO SALTINI: Certainly that was a key development for the Custody of the Holy Land, which since 2006 has been able to count on a structure created to reinforce the impact of its mission. What we enabled all of the pilgrims, friends, businesses and supporters to do, through the projects of ATS pro Terra Sancta, was precisely this: to contribute to, to take part in the great mission that the Universal Church entrusted to the Franciscan friars eight centuries ago, that of safeguarding the Holy Places and supporting the Christian community in the Holy Land. It always is a pleasure for me to point out that everything we do is carried out in the name and on behalf of the Custody of the Holy Land. Our leading figures are those who direct the Custody: in the first instance, the Custos (author’s note: Pierbattista Pizzaballa, ofm, who is also President of ATS pro Terra Sancta), the Custody’s Bursar’s Office and its secretariat, and the Delegate of the Holy Land in Italy.

– Reviewing the past, Carla, is there a particular project you recall with special pleasure?

CARLA BENELLI: Certainly the first project carried out with Father Michele and Osama. I remember those summers spent in giving training courses in Jordan and Syria for mosaicists from Lebanon, Jordan, Iraq, Syria and Palestine. We worked in beautiful places and trained so many young people, who now are working to preserve their own historical and cultural heritages. This was certainly a model project for both us and our partners, in various countries, and one that enabled the team from ATS pro Terra Sancta to become stronger, to consolidate itself. In addition to ATS pro Terra Sancta, the other NGO that owes its birth to Father Michele Piccirillo is the Mosaic Center of Jericho, which was also formed in this period and as a result of this same project, and whose history is very similar to that of ATS pro Terra Sancta. The only difference is that the Mosaic Center is a Palestinian NGO, while ATS pro Terra Sancta has its headquarters in Italy.

– Looking on the other hand to the future, what aspects of its actions does ATS pro Terra Sancta intend to emphasize?

TOMMASO SALTINI: The NGO will certainly continue as a very “light” structure which has functioned – and we hope that it will continue to be able to do so – thanks to the volunteer efforts of a large number of highly-qualified experts, who have chosen to come to the Holy Land or to aid us from their home countries by offering us their professional skills. Those who are working for ATS pro Terra Sancta do so, above all, for idealistic reasons, adopting for themselves the mission of the Custody of the Holy Land, and this undoubtedly adds further value to their work.

In addition, I have to stress the fact that while the results achieved during these years through the projects of ATS pro Terra Sancta have been economic ones, the projects have also had, and this is even more important, positive results in terms of their social and cultural impact. They have been concrete actions in support of the people and places in this Holy Land.

– What elements of continuity have there been in the activities of ATS pro Terra Sancta?

TOMMASO SALTINI: One of the activities that since 2006, by conscious choice of the friars of the Custody, has characterized the work of ATS has been that directed towards the schools of the Holy Land: providing support to children, to the Christian families most in need, in order to confront the education emergency and to help make a reality the words of the Custos, who has affirmed that “School is a fundamental experience of dialogue and coexistence among the different elements of society, and it is also a privileged place for safeguarding the Christian identity”. Our activities have therefore, at the explicit request of the Custos of the Holy Land, always focused on the neediest, the weakest elements of society, in supporting important projects such as those for emergency education, the Magnificat musical institute, and the schools of the Holy Land.

– Do you want to mention other activities initiated in the past years that will continue in the future?

TOMMASO SALTINI: Another of the areas in which we have always reacted quickly, since 2006, has been responding to emergencies, which in this region unfortunately occur all too frequently. I recall that one of the first projects financed by an institutional donor was one for decentralized development – supported by a number of Italian regions and communes – to aid people in the villages in the north of Israel, when the war with Hezbollah broke out in 2006. It was the first time that ATS pro Terra Sancta, which was still quite new as a true and proper NGO, got directly involved in channeling resources obtained from different institutions to respond to an emergency situation. From this moment on, we have always given special attention to situations arising from humanitarian crises of whatever type, never getting involved in the politics of the situation but always supporting in a concrete manner Christians and their works of charity, always open to everyone. This is what happened in Gaza, in Egypt, and this year in Syria. In the name of the Custody of the Holy Land, we have been among the first on these occasions to call for concrete action, allowing us to be able to intervene in a timely manner in support of the local peoples affected, thanks to the generous contributions from so many small donors.