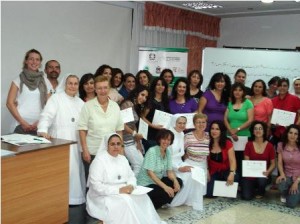 The Ephpheta Paul VI Institute in Bethlehem for audio-phonetic rehabilitation was the site of a recent course entitled “Education as an introduction to total reality”. The course was developed as part of the Ministry of Foreign Affairs project “Supporting emergency education in the Palestinian Autonomous Territories” promoted by the AVSI Foundation in collaboration with ATS pro Terra Sancta.

The organizers of the course, both of whom carried out exemplary work, were Professor Luisa Cogo, who deals with consulting and training at the CdO Opere Educative, and Professor Clara Broggi who works with AVSI Uganda at the Permanent Center for Education.

On the first day three themes were discussed: education as an introduction to total reality, tradition as the explanatory hypothesis by which we enter into the real, and authority as the person that makes one grow. On the second day, discussions centered on the risk of freedom for the student who is inextricably involved in the educational relationship, and the need for personal verification. Over the course of the two days, films were shown on the theme of education in the family (All together with feeling) and in school (Sister act 2).

At the end of the course ATS pro Terra Sancta and AVSI distributed certificates of attendance to all the participants.

The commitment and interest of the participating teachers was very apparent throughout each phase of the seminar. It was interesting to see the manner in which they accepted the challenge to provide answers coming not only from their professional lives but also from their own life experiences, and the way in which they participated in discussions as individuals as well as professionals.