Education is a key factor for promoting dialogue in the Holy Land: the intervention of the Custos at the workshop on education organized in Bethlehem by AVSI and ATS pro Terra Sancta 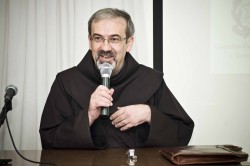 The two-day workshop in Bethlehem on the theme of education organized by AVSI and ATS pro Terra Sancta opened with a heartfelt intervention by Father Custos, Pierbattista Pizzaballa.

“We are all in agreement”, declared Father Custos, “in considering education to be a key factor, but how do we move from this affirmation, which is generally accepted, to something organic and systematic? We Christians are very few in this land, only 5 per cent, and we are conscious of this. We want to be active in the educational sphere, but we also have need of cooperation from other institutions. One of the greatest contributions we can make is in education (it suffices to think of our schools, which enjoy a very high reputation). There are other things that we can contribute, but what? It is essential to maintain an active dialogue among the various identities that exist in this land, which today have no choice but to coexist with one another. Perhaps, rather than providing answers, we should seek to keep the questions alive.”

Education is an urgent matter in Palestine, where secondary school attendance rates are only 65 per cent. Interventions to support education provide an opportunity to promote dialogue and exchange, through activities directed at young people, educators and families, and collaboration among individuals coming from different cultural backgrounds. The Custody has for a number of years supported works in the educational and cultural spheres. These universal missions are aimed not only at Christians but also Muslims and Jews, in an effort to bring people together without regard to social class or religious belief.

Emergency education in the Palestinian Territories: the workshop organized in Bethlehem by AVSI and ATS pro Terra Sancta closes on a positive note