Frattini in the Franciscan school at Jericho 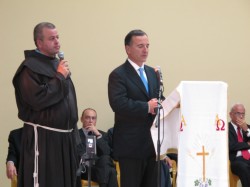 “Education and culture are two formidable instruments for promoting peace. And this is why we will continue to invest in the school and in education in this land.” With these words Italian Foreign Minister Franco Frattini inaugurated on Tuesday 23 November the multipurpose center at the Terra Sancta School in Jericho, a project realized thanks to aid provided by the Italian government within the framework of a large-scale education program of the United Nations Development Programme (UNDP). The school continues to be supported through the ATS pro TERRA Sancta and AVSA project launched in the beginning of November and financed through Italian aid funds.

The head of the Italian diplomatic service, on a visit to the Middle East to show Italy’s support for the peace process, met with students from the Franciscan school and a number of brothers of the Custody of the Holy Land and emphasized the important role played by the Custody’s brothers as educators. “I have seen in this beautiful city the peaceful living together of people of different faiths and cultures”, the Minister said, “and this school is the living proof that reconciliation among people of different faiths is both possible and necessary”. Frattini concluded by stressing the importance of the Christian presence in the Holy Land, describing the Christian population as an “added value” that enriches the Palestinian people and civilization.