iBreviary: a resounding success for the application bringing the Breviary to smartphones | Pro Terra Sancta
Uncategorized

iBreviary: a resounding success for the application bringing the Breviary to smartphones 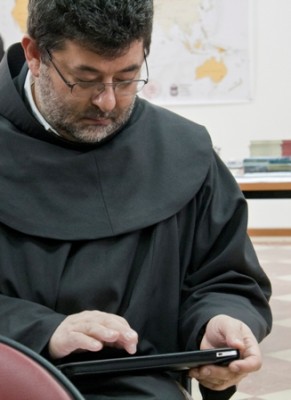 The news of this extraordinary invention has spread like wildfire on the Internet: bringing together Holy Scripture and technology, iBreviary puts the traditional prayer of the Breviary and all of the texts of the Liturgy on Windows Phone 7!

The creator of this software – the only one of its kind – is Father Paolo Padrini, who is in charge of coordinating the various projects of the Custody of the Holy Land related to Internet communications and who has now begun a special collaboration with ATS pro Terra Sancta. Interviewed by Vatican Insider, the “priest 2.0” explained the birth of this idea in the following manner: “Prayer is the most ‘portable’ thing there is (…). So I said to myself, why not use these new devices to do that? Why should the Breviary not be included in the everyday simple activities available to people via mobile-phone and the latest computer devices.”

The reviews of the iBreviary have been uniformly positive, and large numbers of people are already using the application, including cardinals, priests, seminarians and lay people. As one can read on Radio Vaticana: “Completely new, apart from the attractive and elegant graphics (beyond being merely functional), are the technical characteristics of the application”, while Global News Tech informs its readers that with the iBreviary one can now participate in Mass: [the application] contains all of the texts of the readings used during the liturgical celebrations, as well as all of the principal Catholic prayers and Rituals used by priests and lay people for the celebration of marriages, funerals, Anointing of the Sick, confessions, etc.”

Catholic.net has dedicated a page to the innovative idea, declaring: “It is great to be used as a tool for meditation, reflection and daily prayer.”

An equal amount of attention is being given to the collaboration that has been initiated between Father Paolo Padrini and ATS pro Terra Sancta, as a result of which iBreviary users can bring themselves closer, at the same time, to the Holy Land and to the reality of the Middle Eastern Christian community. In the Zenit one can read that: “Thanks to the ‘Pro Terra Sancta’ iBreviary it will now be possible to join in prayer through reciting the Breviary and the readings actually being used in the sanctuaries in the Holy Land. Moreover, it will be possible to keep abreast of the activities of the Franciscans in the Holy Land, and to support their charitable initiative through one’s own donations.”