WE SHALL NOT GIVE UP ON SYRIA

We all gave a sigh of relief, a year and a half ago, when televisions around the world were broadcasting images of the people of Aleppo celebrating the freedom reached after months of fighting in the martyr city. We had hoped, perhaps for a moment, that it would all be over soon. That we could  write the word “end” to a disastrous war, that has lasted for years. 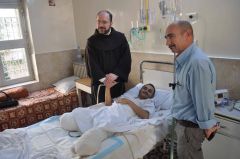 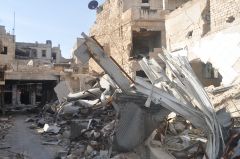 In the last period the spotlight has returned to point Damascus, since the city was hit by a new wave of violence, and it is more than widespread opinion that the war will still be long. Today we are forced to remember the sad anniversary that drags us into the eighth year of this conflict, that started with the illusion of the so-called “Arab springs“, in Syria in March 2011. What seemed like a dream of revenge was soon transformed into a nightmare of jihadism and fundamentalism, from which the whole Middle East has not yet managed to get out.

In these very long seven years, we the Association pro Terra Sancta (ATS) never stopped to work in Syria. In addition to the opening of four emergency centers in some war-affected cities (Damascus, Aleppo, Knayeh and Latakiah), we guaranteed health care for thousands of families and education for hundreds of children who could no longer go to school. We intervened in wherever our help was needed, often thanks to the precious collaboration of the friars who never left the country. 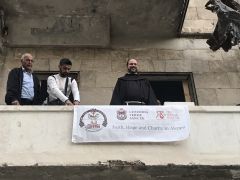 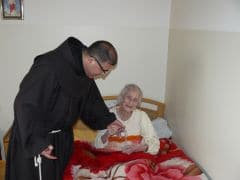 At the beginning of the eighth year of the war, we want to repeat it in a loud voice: we shall not give up! We want to go on to help the Syrians and Syria, where Christians began to call themselves by this name. This is why in recent weeks we have decided to launch a new project in Aleppo that will take care of orphaned children, abandoned by their families and all those born of women as a result of rape and abuse. It is a part of society that no one wants to look at, a problem that is often hidden so as not to create scandal. In these cases, in fact, children and their mothers do not receive any kind of assistance from the State (rather, they are viewed with hostility because they are considered children of sin and are not enrolled in the registry), and on many occasions live in terrible conditions.

They are marginalized by everyone and in need of everything: food, water, but also a psychological and social recovery. This is why the apostolic vicar of Aleppo Msgr. George Abou Khazen, with Fr. Firas Lutfi and the Mufti of Aleppo, have decided to give life to this new initiative that – we hope – can buffer this serious social emergency. The main objective is to support children and their mothers in society by providing for their most urgent needs. We at ATS pro Terra Sancta have chosen to be by their side to give a smile to these children. And while we wait for the great international powers to reach an agreement that can lead to a long and lasting peace agreement, we renew in particular our commitment to the poorest and most defenseless: the children of Syria.

The future of the country is also in their hands. We know that the military can only win the war. But building peace is another thing: it involves a daily and constant work, of education and formation of consciences. Why do not anger or resentment triumph over the evil received, but the conviction of being able to start over. And the hope of being able to return to call Syria – once again – a land of meeting and peace. Thanks to your help, we continue to work for this.

The hands and heart of Mattia, a volunteering physiotherapist in Bethlehem