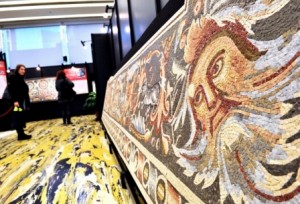 This morning in Milan (the 6th of December), at the offices of the Regional Council of Lombardy in the Pirelli Tower, the inauguration was held for the exhibition Mosaics from the Holy Land which presents full-scale replicas of some of the most beautiful mosaics from the Holy Land. Participants at the presentation included Davide Boni, President of the Regional Council of Lombardy, Carlo Spreafico, adviser and secretary of the Council, Giuseppe Caffulli, director of Terrasanta magazine, and Osama Hamdan and Carla Benelli, the curators of the exhibition.

The exhibition was made possible by contributions from the European Union and ATS pro Terra Sancta, the NGO of the Custody of the Holy Land. Full-size copies of a number of mosaic masterpieces from the Holy Land are on exhibit, produced by Palestinian mosaic artists from the Mosaic Center of Jericho and their counterparts from Italy who created the reproductions making use of the same colors and materials (stone mosaic tile, glass, gold and mother-of-pearl) used in the originals. In his presentation to the press, Davide Boni expressed his happiness at being able to open this event in a new exhibition area at the Pirelli Tower, where in recent months – after the transfer of the presidency and many of the offices to the new Palazzo Lombardia – members of the Regional Council and supporting staff have been installed.

Mosaic art is characteristic of the Mediterranean basin. In Palestine it had an exceptionally long life compared to other regions: it began in the Hellenistic era, and continued throughout the Roman, Byzantine, Islamic, Crusader and Mameluke eras, for a total of at least fourteen centuries. The present Palestinian Territories preserve a number of mosaics that are among the most beautiful surviving examples of ancient mosaic art. The objectives of the exhibition are to increase the consciousness of both the international and local communities as to the importance of this Palestinian heritage, and to facilitate its preservation. The variety of locations where the original works were found (churches, palaces, mosques, religious schools, etc.) and of historical periods in which they originated give an opportunity to reflect on the rich and diverse history of the land and its extraordinary cultural heritage.

“We are seeking to build bridges of peace through culture as a reminder that cultural memory and heritage belong to everyone regardless of their religion”. With these words Osama Hamdan, architect and collaborator with ATS pro Terra Sancta, introduced the project, presenting it as a practical example of how cultural initiatives can also contribute to building the relationships that are necessary steps along the road to peace. “We live in a very difficult period, in which the divisions between West and East, between Christianity and Islam, are becoming ever more pronounced – explained the Palestinian architect who for a number of years has worked with the Franciscans of the Holy Land – and this exhibition seeks in a small way to represent a bridge that can help to overcome these differences.”

The initiative has seen young Palestinians and Italians working side by side to rediscover an art from the past and to create veritable works of art, representations of original mosaics from the Holy Land. The origin of the project goes back to 1997, the year in which Father Michele Piccirillo, the noted Franciscan architect, initiated the training of young Palestinians.

Many difficulties had to be overcome over the years, but these were more than compensated for by the satisfactions and results: over the past few months the exhibition, which includes reproductions of mosaics from Jerusalem, Nablus, Bethlehem and Gaza, has been shown at Al-Quds University in Jerusalem, in Hebron (West Bank), and in Mazara del Vallo (Sicily).

The exhibition was made possible through the sponsorship of the Regional Council of Lombardy and has been promoted by the Custody of the Holy Land, ATS pro Terra Sancta, Edizioni Terra Santa and the Fondazione La Residenza. The exhibition can be visited every day from 6 to 16 December between 10.30 and 19.00, without entry charge, in the Pirelli Hall at via Fabio Filzi, 22. For schools there is the possibility to participate in creative workshops on mosaic techniques alongside the mosaicists who produced the works that are on display (mornings, for reservations contact Alberto Fossati: fossati@terrasanta.net).

Photo taken from the photo gallery of La Repubblica.