Jericho, the school and the city’s Christian community: News from the Church of the Good Shepherd 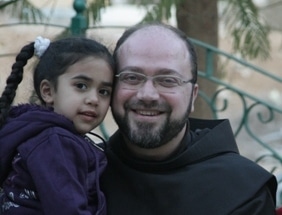 Below is a transcript of our interview with Father Ibrahim, parish priest of the Church of the Good Shepherd and director of the Terra Santa School in Jericho, in which he talks about the situation in the small Palestinian town where he is working.

– How long have you been in Jericho? And where were you before that?

I’ve been in Jericho for a year and a half. Before I came here I worked at two missions, the first in Jordan and the second in Lebanon.

– How many Christians are there in the ‘City of Palm Trees’? And of them, how many are Catholic?

Here in Jericho the Christian community makes up around 1% of the population. There are 370 of us out of a total population of 37,000. The Christians belong to two main denominations: Catholics (54 families) and Orthodox (30 families). There’s also a small Syriac Orthodox community (3 families).

– Near to the Church of the Good Shepherd there’s a very large school building. How many children attend the school? Are they all Christians? What sort of things do they study there?

Since 1925 when the friars established themselves in Jericho, they’ve been thinking of ways to act as ‘light of the world’ and ‘salt of the Earth’ within the city. They found that there was great need in the field of education, and so they rented a small building near the church and opened a school for 100 pupils. This was how the Terra Santa School in Jericho began. Today, after more than sixty years, there are 470 pupils. Of those, just 6.2% are Christians, while the remaining 93.8% are Muslims.

– And what about the other schools in the area?

Today there are 22 state schools in Jericho, as well as a few private schools. Along with the one run by the Franciscan Missionary Sisters of the Immaculate Heart of Mary, ours is the only Christian schools.

– What sort of support does the school receive? And how is it all paid for?

We don’t receive any financial help from the Palestinian authorities, and given the economic circumstances of the local people we can only expect the children’s parents to pay fees that cover the bare minimum. The money they give us covers only around 25% of the teachers’ wages and activities and maintenance costs.

In general, religious congregations use school fees to pay for the upkeep of monasteries and friaries, but in the case of the Custodian of the Holy Land, our friary has to cover the deficit with a fixed sum each month. The rest comes from the contributions made by pilgrims when they celebrate Mass in our church, or from those who make charitable donations.

– How many friars live here? What is their mission in the Parish of the Good Shepherd?

We’re a small community, just two friars, and I’m the only priest. I fill the positions of parish priest, father superior at the friary and head teacher at the school, while the other friar takes care of the day-to-day running of the church and the friary.

– Can you tell us more about your work as parish priest, and as a member of the Franciscan order, alongside the people of Jericho?

Services for the people of Jericho:

By his very nature a Christian cannot think only of himself or of ‘his people’, by which I mean other Christians. The power of Christ’s love leads him always to look beyond his own self, and to think of the common good of all the people he lives alongside. And so, beginning with the relationship between the previous parish priest and another priest in Italy, an association of Italian mayors took it upon themselves to organise contributions towards the construction of a center for disabled people, the only one in Jericho.  Likewise, along with the help of Franciscan initiatives, a public library has been built in the city, and again it is the only one. As I said before, opening the school here was also done in the spirit of the Franciscans, for the good of all the people.

For my part, as parish priest of Jericho and working alongside the mayor, I act as a spokesperson for Jericho and the city’s needs when I meet with political and community leaders from various countries. I try to encourage every initiative as a way of meeting the needs of the local people. On top of this, it’s important not to forget the help that is offered on a more personal level to those in need. It should be borne in mind that the school does a great service to the local people not only by offering them education, but also by providing work for numerous teachers and other workers.

Services for the Christian community:

With regard to the local Christians, our most basic service is to provide them with the material assistance that is key to their survival. All of that, however, depends on what we are lucky enough to receive ourselves. In practice we get involved in everything, from maintenance work on dilapidated housing to helping out with grocery costs for the neediest families with the most children, from covering school fees to assisting the elderly (who for the most part don’t have any medical insurance and don’t receive a pension), from university bursaries to helping young married couples.

– What sort of ties do you have to other churches? And with the Muslim community? Do you meet together to resolve the people’s problems?

In Jericho there’s an Orthodox parish that includes around thirty families (102 people). The Orthodox priest is of Greek origin and doesn’t speak Arabic very well, and so there are always some communication difficulties. Then there are also a few Syriac Orthodox families, and we have an excellent relationship with their bishop.

Ecumenism plays a part in our everyday lives- by which I mean practical services for all Christians rather than co-operation between parish priests. People receive help according to their need, no matter what their denomination. For example, all the children come to catechism classes at our church, and the same goes for the scouts group. The adult catechism classes are open to all, and so are the fetes and yearly trips that we organise. The school fees are covered for the children from Orthodox families, just as they for Catholic families. This is because the Catholic Church of the Good Shepherd takes care of all Christian children, not just the Catholic ones.

As for co-operation with the Muslim community leaders, the Government organises meetings so that we can decide together on what is in everyone’s best interest. Most of the time there is an atmosphere of mutual respect. For our part, the work we are already carrying out through the school is of great importance. We make a lot of sacrifices, but we are happy to make them. This is our contribution, and it’s no small thing for the people of Jericho.

– How are you seen by the non-Christian population? Do you celebrate together, and is there a healthy, neighbourly atmosphere?

During Christian and Muslim festivities and during national holidays too, we pass on our best wishes to each other. It’s normally quite a ceremony, with government and military representatives present as well. At the everyday level, Jericho has a special and unique atmosphere. For example, when there is a funeral, everybody goes to offer their condolences to the family.

In spite of this, fundamentalist Islam has a growing presence in certain areas due to the conflict with Israel. The bitterness that the Muslims carry in their hearts, when it is combined with ignorance, can take on the form of a blind rage that is dangerous even for the Christian Arabs who share their suffering.

– Jericho is also a Biblical city. What significance does this have?

Jericho is one of the most ancient cities in the world, and it is a Biblical city. The archaeological finds, the culture, the songs and even the names of the districts of Jericho (Sycamore, Zacchaeus) are testament to the living link between the Bible and the city of Jericho. But the greatest and strongest testament is the continuing Christian presence, as they are the living stones. Their presence testifies to the fact that Jesus once visited the city, leaving not only memories and material traces but also many followers. The very lives of these Christians confirms that He is risen, and that Zacchaeus was not the only one to experience spiritual healing, just as the blind man was not the one to be physically healed.

To find out more about the project being carried out in Jericho thanks to the support of ATS pro terra Sancta, click here.

Capernaum: the new website dedicated to the "City of Jesus"