Jerusalem: conclusion of the work program of the Commissaries | Pro Terra Sancta
Uncategorized

Jerusalem: conclusion of the work program of the Commissaries 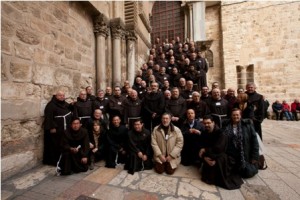 On Saturday 4 February the 3rd International Congress of the Commissaries of the Holy Land concluded with the reading of the Vade Mecum – the final document establishing guidelines for the future – and with a solemn Mass presided by the Minister General of the Franciscan Order, José Rodríguez Carballo.

An interview of Father Giorgio Vigna, Secretary General of the Congress and head of the Custodial Office for the Coordination of the Commissariats, with Vatican Radio can be found here. Additional information, documents, and photos relative to the event can be found on the site created especially for the Congress: convegnumcustodiae.org.

ATS pro Terra Sancta also contributed to the good success of the Congress, both by presenting to the Commissaries the activities it is carrying out in support of the Custody of the Holy Land and by assisting with the organizational and logistical aspects through volunteers from its Jerusalem staff.