Jerusalem, Stones of Memory: the start of renovation works on the Franciscan monastery on Mount Zion | Pro Terra Sancta

Jerusalem, Stones of Memory: the start of renovation works on the Franciscan monastery on Mount Zion 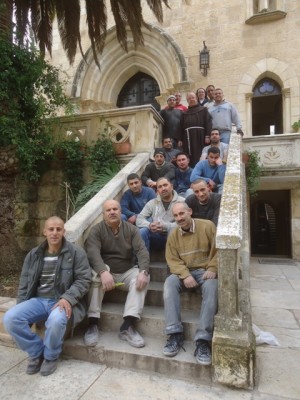 The project “Jerusalem, Stones of Memory” involves renovations not only of residences belonging to the Custody of the Holy Land, but also churches and monasteries.

Monday 12 March saw the start of renovation works on the Franciscan monastery on Mount Zion, near the Holy Cenacle. The works to be carried out by the Bursar’s Office of the Custody using the maintenance team, suitably reinforced, from the Technical Office are scheduled to last five months.

The Monastery of St. Francis ad Coenaculum has a very special significance for the Franciscan community in the Holy Land: for it was on Mount Zion, at the site where the Last Supper is commemorated, that in the 14th century the Friars Minor obtained their first monastery within the city of Jerusalem, from which they were expelled two centuries later by the Turks, never to return. With the construction of the present monastery, inaugurated in 1936 and situated within meters of the old monastery, the friars of the Custody were able to return to Mount Zion, and the title “Guardian of Mount Zion”, centuries earlier conferred upon the Father Custos of the Holy Land, was able to reacquire its original meaning.

At the beginning of the twentieth century the Custody was able to acquire the existing buildings, Arab homes probably dating from the end of the nineteenth century. The new monastery was created by enlarging and modifying these buildings. Substantially damaged during the 1948 war, the structure was last restored at the end of the 1960s. There is no precise information available concerning the buildings from which the present monastery was created: the renovation works may provide an opportunity to learn more about their history.

The monastery does not have any special architectural value nor does it contain any precious works of art. Its importance lies in the fact that it is situated very near to the spot where the Franciscan presence in the Holy Land was initiated, and that within its evocative chapel it continues to offer pilgrims from all over the world the possibility to celebrate the Eucharist in close proximity to the place where this was instituted.