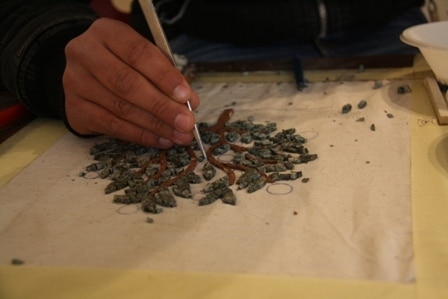 Concentrating on his tablet, Mohammd patiently places a small mosaic tile alongside another, seeking to achieve an appropriate balance of lines and colors. He is just over twenty years old, lives in Sabastiya and has worked for several months as a mosaicist at the village Information Center, also being used as a workshop, which was created through the project “Sabastiya, the fruits of history” supported by ATS pro Terra Sancta along with a contribution from the Cariplo Foundation.

Mosaics are being produced in this center, both on commission and for the village handicraft shop, where tourists and pilgrims who stop in Sabastiya can acquire marmalade and soap made by local women, and small objects decorated with mosaics.

When we visited the workshop, on the table there was a series of reproductions of a tree. Mohammd explained to us that these mosaics are being carried out at the request of the President of the Palestinian Authority Abu Mazen, to be offered as gifts to his hosts during official visits.

Sabastiya itself, like many Palestinian archaeological sites, can boast of the discovery of a truly beautiful mosaic, in this case one dating back to the fourth or fifth century which was found near the tomb of St. John the Baptist during the excavations carried out as part of the project. The mosaic was immediately reburied in order to better preserve it, but anyone who visits Sabastiya can see a faithful reproduction of it alongside the entrance to the Information Center.