Mosaics from the Holy Land on exhibit at Mazara del Vallo 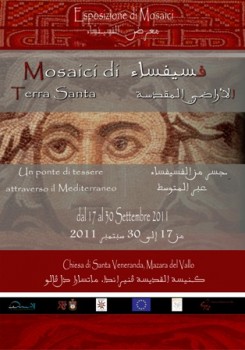 After the success enjoyed by the exhibition of ancient Palestinian mosaics in Hebron during the month of July, the exhibit will be temporarily transferred to Italy and put on display in Sicily, at the Church of Saint Veneranda in Mazara del Vallo (Trapani).

The exhibition, put together with a contribution from the European Union, and whose complete title is “Mosaics of the Holy Land – a bridge of tesserae across the Mediterranean”, will be hosted at the 2011 Sponde Conference organized by the Mazara del Vallo Diocese and the CeMSI (the Mediterranean Center for Intercultural Studies). Apart from these two organizations and, it goes without saying, ATS pro Terra Sancta and the Mosaic Center of Jericho, the exhibition is also being promoted by the Diocesan Museum of Mazara del Vallo.

The participants in the 2011 edition of Sponde will thus have the possibility to admire some of the most beautiful Palestinian mosaics, coming from a wide variety of locations (churches, mosques, palaces, mansions, etc.) and historical periods. What will be exhibited in fact are reproductions of these mosaics carried out by eight artists – two European and six Palestinian – using ancient techniques and materials. Such works illustrate the great value of Palestinian mosaic heritage and testify to the rich and diverse historical, cultural and religious traditions that coexisted in the past in this land.

Present at the event will be both Osama Hamdan and Carla Benelli, collaborators with ATS pro Terra Sancta and curators of the exhibition, along with Imad Doudin, the mosaicist of the Mosaic Center of Jericho, who is also responsible for assembling the exhibition. Also participating will be Vincenzo Bellomo, coordinator of projects promoted by ATS pro Terra Sancta in Jerusalem, who has managed the relations among the organizing institutions, making possible the “transfer” of the mosaics from the Holy Land to Sicily.

The exhibition will be inaugurated on 17 September at 18.00 and will remain open until 30 September.