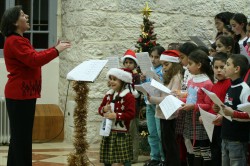 A place, situated in the heart of the Old City of Jerusalem, where Christians, Jews and Muslims meet one another in the name of music: this is the Magnificat Institute, the music school of the Custody of the Holy Land, where children of various nationalities and ethnic groups learn and practice music together. The school of the Custody of the Holy Land, which offers a professional preparation of a high standard in the concert and educational fields, is present at the most important celebrations of the liturgical year in the principal Christian sanctuaries of the Holy Land.

A school, situated in a site rich in tradition, which through its collaboration with the Vicenza Conservatory in Italy is being both modernized and reorganized. The cooperation between the two institutions will allow young musicians from the Holy Land to follow an internationally recognized course of study and to obtain a diploma from the conservatory upon the completion of their studies. In addition, the library of the Jerusalem school will be enlarged and reorganized within the framework of a project to create “musical libraries”, whose function will be not only to furnish young residents in Jerusalem and nearby provinces a site for instruction, but also to create a space for technologically advanced musical experimentation. The instruction and experimentation will take place primarily by means of information technology, making maximum use of the possibilities that computers today offer to the music sector. The libraries – the existing one in Jerusalem and the new ones to be established in Nazareth and Bethlehem – will permit the creation of a place for instruction and study, where new music can be experimented with, special musical effects shared and elaborated, and where the area’s musical and cultural heritage can be organized and renewed.

Support the Holy Places and the Christian Presence in the Holy Land!

You can make a donation: