Opening today of the exhibition “Mosaic Heritage of Palestine”, in the main campus of the Al-Quds University of Jerusalem - Pro Terra Sancta
Uncategorized

Opening today of the exhibition “Mosaic Heritage of Palestine”, in the main campus of the Al-Quds University of Jerusalem 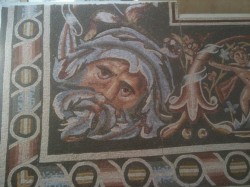 Today, 24th May, the exhibition “Mosaic Heritage of Palestine” was inaugurated in the main campus of Al-Quds University of Jerusalem. It has been organized by the Mosaic Center Jericho with the support of ATS pro Terra Sancta with funds from the European Union.

During the conference, with the participation of representatives from some of the most important Palestinian and international institutions active in Palestine in the field of cultural heritage preservation, particular relevance had the speeches by Arch. Osama Hamdan, collaborator of the Custody of the Holy Land and ATS pro Terra Sancta, Father Eugenio Alliata, professor in archaeology of the Studium Biblicum Franciscanum and Mrs. Carla Benelli, responsible for the projects within the framework of  Memory and Culture by ATS pro Terra Sancta.

Arch. Hamdan introduced the outcome of a research by the Mosaic Center in cooperation with the University of Tessaloniki about the ancient mosaics discovered in the districts of Bethlehem and Jericho during the XX century up to now.

The presence of many Christian mosaics (86%) is notable as against the Hebrew and Islamic ones. The majority of well preserved sites, which can be visited today, is owned and guarded by Christian churches, and they are some of the few instances which have always survived in the Holy Land in spite of the number of conflicts which have affected this area over the centuries.

The most fruitful period in terms of discoveries was the Jordan occupation, followed by the Israeli and English occupations. Unfortunately, the conservation activity carried out by the Palestinian Authority in the last few years has been very limited.

Father Eugenio Alliata introduced studies and research conducted on the famous Madaba mosaic from its discovery up to now. It reproduces the Holy Land map during the Byzantine period (download the presentation). The map shows the main roads, the major cities of that period and the main monuments. There are also places which are very small but relevant because of Bible references they were and are still connected to. The ruins of some of these places have been identified and brought to light in the last few years also thank to the Madaba map, very useful to identify the sites.

Mrs. Carla Benelli introduced and showed the exclusive images of a mosaic recently discovered in Sebastia during the project “Archaeology for Development” promoted by ATS pro Terra Sancta with the contribution of many Italian institutions. The mosaic has not been studied yet and is covered at the moment to protect it until the works of excavation and conservation in the nearby area have been concluded. The mosaic has geometrical decorations together with plants and animals. Most probably it dates back to the Byzantine period (download the presentation).

The cultural heritage is always a great opportunity for the Palestinian economy. It is also a great instrument to educate to what is beautiful and good. Plato says that “beautiful is the mirror of good” and his words were repeated by great Fathers of the church, saints and Christian theologians. We must work so that the Palestinian people – and the many pilgrims and tourists who visit this land – get to discover the heritage they own.

The artistic heritage can help Palestinians to bear the lack of freedom of movement they have been experiencing for too many years, which has a strong negative impact on the creativity of the people, particularly the young ones.