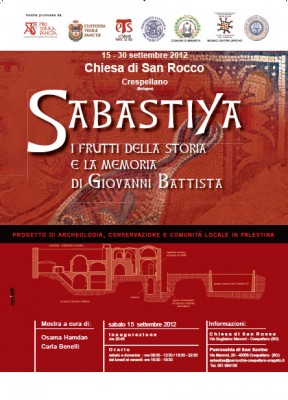 After have been presented at the Catholic University of Milan, the Palazzo Medici Riccardi in Florence and the Loggia del Capitaniato in Vicenza, the exhibition “Sabastiya, the fruits of history and the memory of John the Baptist” is coming to “tiny” Crespellano, organized by the Parish of San Savino and hosted, from the 15th to the 30th of September, in the fifteenth century Church of San Rocco.

An evidence of ATS pro Terra Sancta’s commitment to the preservation and enhancement of the cultural heritage of the ancient capital of the Northern Israelite kingdom, the exhibition portrays, using the results of archaeological missions carried out by the Custody of the Holy Land, the past greatness of what is now a small Palestinian village located not far from Nablus. The exhibition also focuses on its current situation.

Sabastiya, founded by Herod the Great in 25 BC on the site of ancient Samaria, preserves traces from the Hellenistic, Roman and Byzantine periods, but above all the memory of the tomb of John the Baptist, first recorded as being present there during the times of the persecutions against the Christians carried out by Julian the Apostate in 361-362.

Beyond the walls of the town, above a tomb that had earlier been venerated, a small church was constructed during the Byzantine period, subsequently replaced in 1145 by a much larger Crusader one that was exceeded in size only by the Church of the Holy Sepulchre. Later it was converted into a mosque.

This is only a small part of the story, however. The far more important part, which the hard limestone from which the town was constructed is unable to convey, is in fact the story of a common heritage that should inspire mutual respect and understanding: it is the history of a place of worship shared between Christians, who have honored there the Precursor, and Muslims, who have honored there the Prophet Yahya, as John the Baptist is known in Islam. It is the story… but for the ending you’ll have to come to San Rocco.

Sabastiya, the fruits of history and the memory of John the Baptist