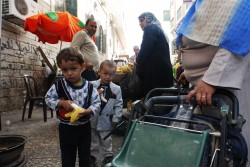 The following are stories reported by ATS pro Terra Sancta volunteers working in Bethlehem.  Thanks to the help of the Franciscan Social Service Office, they can get involved with very serious cases.

THANKS TO THE VOLUNTEERS…

M and her family live in a very old and poorly maintained house that has many problems: the roof is partially open meaning that the house is open to the elements, the wiring and pipes have severe water damage, some of the doors are stuck and there is mould and rust everywhere due to the humidity and general neglect.

Following the advise of the social worker from FSSO, The Custody of the Holy Land has put together a team of Italian volunteers who offered this family an extra special surprise inside their Easter egg: the renovation of their small family home.

CARING FOR WOMEN WITH PROBLEMS…

Following the great work of FSSO workers and the schools of the Holy Land, a project was launched concerning eleven women with serious family problems: domestic violence, abandonment, poverty and the inability to raise their children.  Also onboard with this project are two psychiatrists from GTC in Bethlehem, a centre offering counseling services.

After the initial difficulties in creating and strengthening a bond with the social workers from FSSO who are always present during the sessions, the mothers have addressed their fears head on, knowing that their newfound calmness will spread throughout their families.  This calmness gives them pause to greet Easter with joy.

The people of Bethlehem are learning to understand and trust the work that the Association of the Holy Land is carrying out to support those in need.  More and more, we are seeing people appealing to the Franciscan Social Service Office to make donations.

One example of this is Mrs. F, who came to the office with a television that she wanted to donate to a family in need in Bethlehem.  FSSO decided to gift this donation to a large, poor family who has also been given a new living room and new wardrobes for the girl’s bedroom.

As well as keeping the foundations of the Holy Land alive, the Franciscan friars also aim to raise awareness so that the citizens of Bethlehem help their brothers in need.