The Association “Romano Gelmini for the people of the Holy Land”: completion of the summer 2012 missions 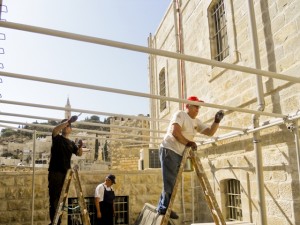 There were in fact 43 volunteers who, between the end of April and the middle of July, answered the call to come help out in moving St. Saviour’s Library from its old site to the new one. Divided into five sub-missions, each lasting two weeks, this resulted in a continuous presence of volunteers over a two and a half month period to support the projects of the Custody of the Holy Land, enabling a wide range of tasks to be carried out, with the volunteers always paying special attention to the requirements and being available for any new need as it arose.

The volunteers played a key role in carrying out the transfer of books, which is now nearly complete. For weeks volunteers selected, cleaned and packed books, a humble work carried out with care and patience by those who willingly offered their hard work in order to help construct something truly important. The work of assembling the new mobile shelving system, which came from Holland, was also carried out with great care, with the volunteers working alongside several local workers from the Custody’s Technical Office.

Following this, the volunteers were then distributed among the different convents and monasteries in and around Jerusalem in order to help out with all types of tasks: cutting grass, arranging furniture, repairing equipment, emptying premises, rearranging storerooms… Always happy, tireless, always looking for something new to do!

The Association “Romano Gelmini for the people of the Holy Land” was established in 2005 and has thus far organized 42 missions, bringing more than 100 volunteers to the Holy Land.