The cultural heritage of mosaics on exhibition in Jerusalem: grand success for the initiative supported by ATS pro Terra Sancta 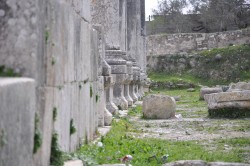 A grand success for the exhibition “Holy Land Mosaics”, inaugurated in the presence of representatives of all of the institutions involved in its organization (the Vice President of Al-Quds University in Jerusalem, the representative of the Office of the European Union in Jerusalem, a representative of the Palestinian Ministry of Tourism and Antiquities, representatives of ATS pro Terra Sancta and the president of the Mosaic Centre Jericho-Committee for the Promotion of Tourism). A large number of students and professors from the University, most notably from the Institute of Archaeology, also attended. There was also a significant participation of Palestinian and European print and television journalists, who provided an immediate boost for the initiative, bringing to the attention of the entire world the importance of mosaic art.“Mosaic art for a very long period characterized decorative art in Palestine at civil and religious sites of diverse cultures and peoples: from the Hellenistic era to the times of the Mamelukes, from the second century BC to the fourteenth century AD”, explained Carlo Benelli, an art historian and the coordinator of the project on behalf of ATS pro Terra Sancta. “The mosaic has also been an element of exchange and dialogue between the different Mediterranean countries, and the Mosaic Centre Jericho in Jericho is working for their rediscovery, which always serves as a source of curiosity and reflection for the local population.”

ATS pro Terra Sancta has for a number of years been involved in restoration and preservation activities in the historical center of Sebastia, where works are being carried out on a continual basis. “The discoveries continue to surprise us”, Carla Benelli recounted. “At the moment we are working on cleaning up a large hall from the Crusader era that until very recently was being used as a sewer for the surrounding houses. The recovery of the site is extraordinary not only for its historical value, but also because it allows us to help support the town’s economy, providing employment for local workers.”

In Sebastia a guest house has been in operation for several years, permitting pilgrims, tourists and lovers of Palestine and nature to spend some time in Samaria, thereby aiding the local economy.