The exhibition at the Rimini Meeting on Jesus’ life at Capernaum 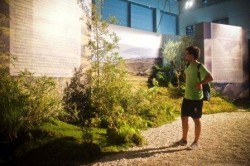 The exhibition on Jesus’ life at Capernaum was inaugurated yesterday 21 August on the occasion of the 32nd edition of the noted Rimini Meeting with the title “And existence becomes an immense certainty”. Many visitors came on the opening day to see the exhibition. Among them was the Italian President Giorgio Napolitano.

The exhibition “Through the eyes of the Apostles – A presence which overwhelms life” displays Jesus’ life at Capernaum. Capernaum is the ancient village on the shore of the Sea of Galilee where Jesus appointed his first disciples and accomplished many miracles. Guided through four different excursions on the history and archaeology of the Capernaum site, the visitors will enjoy the view of some beautiful 1.1 scale replicas of the ancient village of Capernaum.

The Capernaum site was investigated through several archaeological campaigns carried out by the Custody of the Holy Land during the 19th and 20th century. The excavations led to extraordinary discoveries, testimony to the historical fact of Jesus’life. Capernaum represents today a precious Holy Place and an archaeological site of great importance visited by millions of pilgrims.

The exhibition, produced with the support of the Custody of the Holy Land, is being carried out through the collaboration of ATS pro Terra Sancta and numerous experts and friends, under the direction of its curator José Miguel Garcia, Professor of New Testament Exegesis at the San Dámaso Faculty of Theology in Madrid. It will be opened to the public from 21 to 27 August.

The Custos of the Holy Land Pierbattista Pizzaballa has been officially invited to present the exhibition during the week of the Meeting. The event will be held on Wednesday 24 August 2011 at 17.00, with the participation of José Miguel Garcia, the exhibition’s curator.

We invite you to the session with Father Custos and we look forward to seeing you throughout the week at the exposition with the staff of ATS pro Terra Sancta and numerous friars of the Custody of the Holy Land.

ATS pro Terra Sancta and the Custody of the Holy Land are committed to preserve and enhance the Capernaum site. Additional information on the project, “Capernaum, the city of Jesus”.