The hands and heart of Mattia, a volunteering physiotherapist in Bethlehem

Mattia is a thirty years physiotherapist. After studying in Milan and in Germany, a Franciscan friend of his urged him to come to the Holy Land in Bethlehem. “After three months at the La Chreche orphanage – Mattia explains – I was struck by the stories and the faces of those children, so I wanted to continue to give them a hand”. Thanks to ATS pro Terra Sancta and the Habibi Association, Mattia worked for a year with the elderly people of the Antonian Society of Bethlehem and with the children of Hogar Niño Dios, the home for disabled children, abandoned or in grave need , managed by the religious nuns of the Family of the Incarnate Word. In Palestine there is no pension system or public health assistance, so without donations and the help of the sisters and friars these elderly people and children would be completely abandoned. “These places where I worked are the only way to survive for them” says Mattia while massaging the legs of Maria (84 years), who has been stuck in bed for several years now. 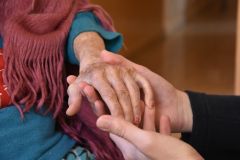 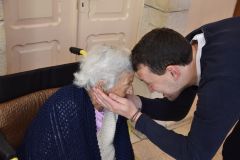 “Takke” says Afifeh, whenever she hears the noises of her joints being moved. She is over ninety and she is one of the oldest living in the structure. “In the beginning she kept on repeating ‘bukhra thigi’ in Arabic. After a while I understood that she meant ‘are you coming back tomorrow?’” Mattia explains. “It really struck me because it means that she was waiting form me and that I had left a mark”. As he approaches other patients, some women kiss his hands and bring them to their forehead, which is a typical gesture that they use here to adress priestsd of the Eastern churches. Now they address it to him because thanks to those hands

they suffer less. As Mattia tells us: “In the doctor-patient relationship, the human relationship is everything, especially in a nursing home where the patient are always in bed”.

Mattia was mostly struck by the people in Bethlehem: they welcomed him as a son.

Duah a beautiful 5-year-old girl who looks like a 2 year old who could not even sit. Mattia tells us that the therapy was hard for her but, “after a year of work, she can now stand up and with a little support, she walks too”. Many of the children know him and love him. Most of the time thoug they are not able to talk and cannot express it in words, just like Marcellinus (Mohammad). He met him at La Chreche, he does not speak because of a trauma, but he always runs and smiles, and takes the hand of those who approach him to tell him to follow him and play with him. 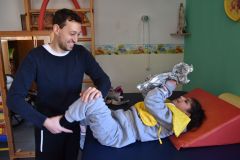 “With the elderly and with the children you realize that the result is not the only thing that matters, especially when you realize that there are unsolvable problems” explains Mattia massaging the joints of Sofir, a 7 year old girl, whose serious mental retardation will never allow her to walk.

Now it is his last day of work and they have organized a farewell party with the children of Hogar. The magic touch of his hands will remain impressed especially in the heart and the smile of the elderly and children of Bethlehem. Thanks to ATS pro Terra Sancta, he was able to make a contribution to relieving the sufferings of the body and making their soul happy! In the city where the Savior was born, these words of Jesus are still happening: Whenever you did these things to one of these least of my brothers, you did it to me (Mt 25.40)

Find out more about our activities in Bethlehem!

Easter in Jerusalem: the ATS pro Terra Sancta in the Old City tell us about it