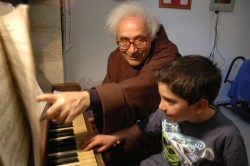 Not only cinema will be presented at this year’s Giffoni Film Festival, but also music which goes beyond the differences. Among the special events will be a concert organized by the Magnificat Institute of Jerusalem which will appear with its Yasmeen choir made up of 25 Arab adolescents. The homage to Italy with “Va’Pensiero” and to Campania and Naples with “Santa Lucia”, which will conclude the evening, is something not to be missed. Present at the concert will be Father Armando Pierucci, director and founder of the Magnificat and organist at the Church of the Holy Sepulchre, while the choir will be directed by Hania Soudah Sabbara. The Magnificat Institute of Jerusalem, which will perform in concert tonight at 21.00 in the Arena del Giardino degli Aranci, is a music school based in the Old City of Jerusalem, a part of the city that is still contested between Israelis and Palestinians. The music school is “open”, a place of “peaceful coexistence”, in which young people of all nationalities and religious beliefs participate in the name of the highest and purest  mutual understanding. In addition to the Giffoni Film Festival, the tour of the Magnificat Institute will include three other stops in Salerno province with performances of “Vocal concerts and sounds from the Holy Land: music beyond the differences.”

Inauguration in Hebron of the exhibition of antique Palestinian mosaics

Holy Land Mosaics – A bridge of tesserae across the Mediterranean: the Exhibition displayed in Hebron