The Old City of Jerusalem: Housing emergency for the Christians of the Holy Land | Pro Terra Sancta
Uncategorized

The Old City of Jerusalem: Housing emergency for the Christians of the Holy Land 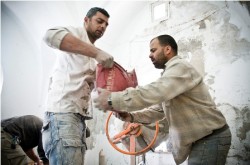 Article 25.1 of the Universal Declaration of Human Rights affirms the right to housing to be a fundamental human right, and hence that to be deprived of this is an injustice. Nonetheless, there are groups who are not permitted to own a home on account of political discrimination arising in regards to religion.

The wars and conflicts in the Middle East provide a dramatic example of this reality. Only those who are owners of land or homes in a city or country have any power and are accorded political and social weight. There has thus been an unrestrained desire (on the part of both Jews and Muslims) to gain possession of dwellings, for which they are prepared to pay astronomical sums that are sometimes up to four times the real value. This is a political issue, but also a religious struggle. The buildings possessed by the different communities in Jerusalem will represent a fundamental element in all future discussions concerning the political and religious “status” of the Holy City.

It was precisely to confront this emergency housing situation that the Franciscans of the Custody of the Holy Land have launched a project whose aim is to restore and maintain the homes of Christians living in the Old City of Jerusalem.

You too can assist the Custody of the Holy Land to ensure that the Holy Places do not become simply open air museums, but instead will continue to preserve the presence of those “living stones” in the Holy Land – the Christians who live there!