The youngsters in Jericho play chess together | Pro Terra Sancta

The youths of Jericho meet together around a chessboard 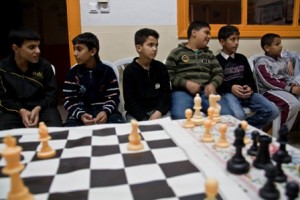 Seated along the sides of the corridor, the youngsters from the Terra Sancta School in Jericho wait their turn to receive their prize: a medal, a cup or simply a certificate of participation in the chess tournament that has just finished. A number has beaming faces, proud of the prize they have won, or simply pleased to have had the opportunity to participate in this tournament that is somewhat out of the ordinary.

In the view of the two teachers who have followed the youths during the course, the game of chess represents an ideal tool for getting youth accustomed to thinking for themselves, competing in a constructive manner, maintaining concentration, and – why not? – simply having fun.

Participating in the chess course, which was carried out as part of the Italian Ministry of Foreign Affairs project “Supporting emergency education in the Palestinian Autonomous Territories” promoted by the AVSI Foundation in collaboration with ATS pro Terra Sancta, were approximately forty youngsters from the Terra Sancta School in Jericho.

The Franciscan presence in Jericho is particularly important for maintaining the continued presence of the small Christian community in this city located in the Palestinian Territories. In this school, which is managed by the Franciscans, Christians represent barely 4 per cent of the school population, and approximately 30 per cent of the teaching staff.

A new ATS project will be launched in the near future, to be entitled “Jericho, aiding Christians in difficulty”, with the aim of providing support to the Custody of the Holy Land in Jericho and the Christian community living there.