Volunteers from the civil service in the Holy Land 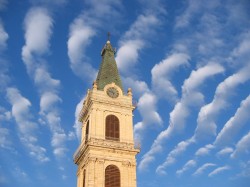 Civil service in the Holy Land: thank to the collaboration with the University of Bari, ATS pro Terra Sancta and the Custody can also welcome in their offices in Jerusalem young volunteers who will serve there for one year within the framework of the cultural activities and the promotion of the artistic heritage conservation of the Custody of the Holy Land, helping restoring and preserving the immense cultural and architectural heritage of the Franciscans of the Holy Land. Partner of the project, together with the Custody, is the Studium Biblicum Franciscanum, with its headquarters in Old Jerusalem.

The volunteers, for some months now in Jerusalem, follow projects about the preservation of the cultural heritage (archaeological excavations, cataloguing of the properties of the Custody, organization of cultural events for the promotion of the local heritage), coordinated by the Franciscan friars who are in charge of the museum and library activities of the Custody and by the ATS pro Terra Sancta office in Jerusalem.

The volunteers will help carrying out data gathering, cataloguing and preserving activities as part of the project “About the Holy Land”. The ultimate aim of the project, and desire of the Holy Land, is the creation of a modern museum centre as an integrated work of communication and cultural production, for pilgrims, tourists, scholars and the local population, to make them know and to highlight – through guided tours with facilities – the history of the Christian presence in the Holy Land and the experience of the Custody in preserving the traces of the presence of Christ and the first Christians.

Who are the pro Terra Sancta volunteers who will have the opportunity to spend one year in Jerusalem and work at the Custody of the Holy Land after the selection process carried out by the University of Bari between September and November 2010 and a training period at the University itself? The following people have been selected: Valentina Gamba, Desi Durbano,  Roberta Meriano and  Serena Mascoli.

Roberta Meriano, degree in science and technology for the conservation of the cultural heritage, works with the ATS pro Terra Sancta project “Jerusalem, stones of memory”, to create a new database on the programmed maintenance and conservation of religious buildings.

Desi Durbano, architect, works with the same project, in the conservation and renovation of the houses, property of the Custody.

Valentina Gamba, degree in classic archaeology in Padua, catalogues the archaeological findings of the Museum of the Studium Biblicum Franicscanum, within the ATS pro Terra Sancta project “About the Holy Land”

Serena Mascoli, degree in archives and books, is working at the precious library of the Monastery of Saint Saviour, where she helps Sister Miriam in cataloguing the many book series preserved in the library.

Thank to an agreement between the Custody of the Holy Land, GPII Foundation and Hogar Nino Dios, four volunteers from the civil service have also been welcomed to Bethlehem since February 1st. Coming from different parts of Italy, they will work at some operation centres supported by ATS pro Terra Sancta, working for one year with the local community in Bethlehem.