What’s in store for the Christian community in the Middle East after the “Arab spring”? | Pro Terra Sancta

What’s in store for the Christian community in the Middle East after the “Arab spring”? 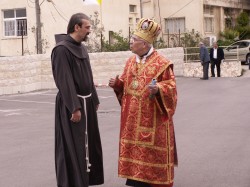 This article concerns Father Pierbattista Pizzaballa, guardian of the Holy Land and president of ATS pro Terra Sancta, and his recent intervention at the international convention for peace in the Middle East.  This convention was held by the Italian Centre in Turin, and addressed the theme of “ethnic and religious minorities in the Mediterranean.

Thanks to the support of the non-government organization ATS pro Terra Sancta, the Custody of the Holy Land is committed to several projects supporting the Christian population in Israel, Palestine, Egypt and Syria.  Recently, the guardian of the holy Land has launched an appeal “Cairo Emergency” to support the friars working in Egypt’s capital.

“After the Arab spring, the Middle East’s Christian minority is becoming stronger and stronger.  They are calling to be “wholly recognized as citizens, with the same rights as all others”, as reported by Father Pizzaballa at a meeting attended by Imams, members of the Jewish community, representatives from the Armenian, Coptic, Kurdish, Roma and Berber communities.

Events that have brought together groups of young Muslims and Christians to call for democracy and freedom have lead to a rise in hope felt throughout the entire Christian community of the Middle East, but notably in Egypt.  Those who live in somewhat difficult conditions due to finding themselves in a religious minority now have hope of truly being recognized as an equal.  Except for the United Arab Emirates, in all of the Middle Eastern countries, Egypt, Jordan, Palestine and Syria, there is a freedom to worship.  Christians are not prevented from practicing their faith however there is not always freedom of conscience.

The guardian of the Holy Land noted that the request for equality emerged last October during the synod of the Middle East.  During the drafting of the final document, the bishops strongly stressed the “importance of equality among citizens”.

What we are waiting for now goes beyond freedom of conscience, as we are not simply born Muslim or Christian but require full citizenship.  The Holy Land’s guardian stresses that Christians in the Middle East are also Arab citizens and want to be recognized as such, with the same rights afforded to them as all others.

Father Pizzaballa has explained how the Christian minority in the Middle East is a religious minority and not an ethnic one, as Middle Eastern Christians “are Arabs, think like Arabs and immerse themselves in Arab culture”. These Christians are “original and authentic citizens, loyal to their country and to their duties as citizens of that country.  It is only natural that they should enjoy their rights to freedom of religion and conscience, to freedom of education and teaching and use of the media”.

In spite of worries brought about by recent current events, concluding a speech the guardian of the Holy Land highlighted the Arab spring as also being “the advent of a new period which has paved the way for change, opening us up to new possibilities for the Christian minority who want to participate wholly in the development of the Arab countries of which they play such an important role”.