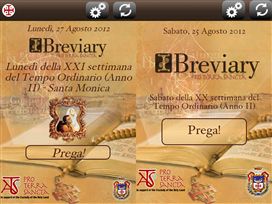 The application, the brainchild of Fr. Paolo Padrini, was made possible thanks to a strong and meaningful partnership with the Custody of the Holy Land. It was brought to fruition by the developer Libero Rodofili and the Italian companies Netguru s.r.l. and iLabora s.r.l.

Many new features are offered in this version: full support for English, Spanish, Portuguese (for which the liturgical texts are now being inserted), German and French, in addition to texts available in Latin and in the Vetus Ordo and Ambrosian Rite (nearing completion) versions.

A new mechanism for downloading texts has also been implemented, and it is now possible to download texts from successive days in different languages, or even the entire week.

From the homepage there is direct  access all of the sites linked to the world of the Custody of the Holy Land, allowing one, for example, to remain constantly in touch and up to date with the projects being implemented by ATS pro Terra Sancta. Another very important feature is the provision of Liturgical texts of the Custody of the Holy Land, which can be displayed by activating the appropriate selector.

iBreviary will also be appropriate for other religious orders (at the moment the Salesians, but texts for the Franciscan Family and other orders are also being prepared) who will be able to use their own liturgical texts. There is also now a function that enables the enlargement of characters.

This new version is compatible with Android devices (both smartphones and tablets), as well as the new Amazon Kindle Fire device.

The application can be downloaded from the Google Play Store and from Amazon: click here to download