A walk through the Holy Land

Dicovering new paths around Bethany, in the footsteps of Jesus.

“Everyone has walked in his life and the journey is part of Faith“. Pietro Labate has been working as an environmental guide in central Italy for thirty years. Recently he was in the Holy Land to draw new routes between Jericho, Bethany and Jerusalem for the new project of the Association pro Terra Sancta: Welcoming Bethany. The goal was to create some paths that enhance the territory around the city of Lazarus, visiting places often cut off from the main tourist circuits and itineraries and meeting the local community.

The aim is to offer development and support to the entire territory, that has experienced strong social hardships in the last years. The city of Bethany does not offer any hiking or marked itineraries, therefore Pietro had to travel around the area to discover new viewpoints and draw new paths. 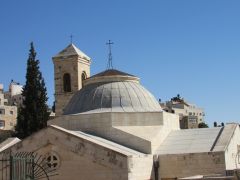 But how do you trace a path? “First you look for it – Pietro told us – and then you have to try it, to check the feasibility, the potential risks and the levels of difficulty. The itinerary is created based on the attractiveness and differs according to the types of visitors”. For two weeks Pietro has walked through paths in the desert or along the hills, through Bedouin villages, settlements and cities. He also visited monasteries and wadis, immerged in olive tree groves and ancient ruins. He was guided by Iyad Njoum, a Bedouin boy who works for the Mosaic Center Jericho.

In Pietro’s opinion it is fundamental to go through places on foot: “You can look, smell, eat and listen to what you have around; otherwise it is like traveling blindfolded. When you walk, you tie yourself to the territory, you are at the same level as people, you can talk, you always have a direct contact or an encounter. When you are walking there is always something unexpected happening, and adventure is part of the journey!”.

As it happened to Pietro in the desert: “One day the wheel broke and we got lost 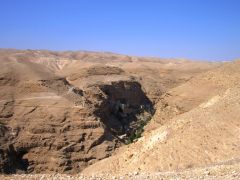 at night in the dark desert. Yet I was not too worried because desert is already a journey into another dimension, an ascetic journey, in the desert you are in a state of perfection. Now I understand the hermits and the prophets who retired themeselves in the Desert!”

One of the objectives of the project is to make the local community aware of its naturalistic and cultural heritage and to promote it through local institutions and operators. As Pietro explained: “the guides must make the visitors feel at home, to convince them that it’s worth coming back, especially here in the Holy Land”.

In conclusion Pietro added: “In Italy I walk thorugh the Via Francigena, the great road that brought pilgrims from all over Europe to the Holy Land during the Middle Ages. But walking here is different, we are at the origins of our Faith. You phisically feel as you were an apostle that follows a path through rocks and sand, to follow the ancient patriarchs and prophets as well as the spirit of God Himself”.

Find out more about our activities in Bethany!

Turin and Bethany, together to restore