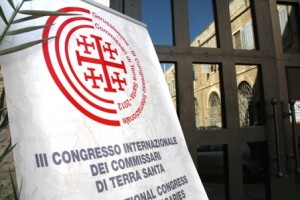 They are actively involved in a wide range of areas including: making the Holy Land better known and loved, through promotion of the territory; organizing and leading pilgrimages; carrying out fund-raising activities; and supporting vocations oriented towards the Holy Land. They are in a real sense the “ambassadors” of the Custody of the Holy Land, inasmuch as they serve as “bridges” between the Custody and the territories assigned to them, namely, the different Provinces to which they belong.

There will be approximately 110 participants, from all over the world and representative of the great diversity of the Franciscan reality in terms of language, culture and traditions, all united by their common commitment to the service of the Holy Land.

The work program for the Congress, which will be divided into twenty-one sessions, is centered on identifying, communicating and sharing appropriate intervention strategies regarding a number of urgent problems confronting the Custody and the Commissaries. The program for the Congress can be consulted on the site dedicated to the meeting: Custodiae Terrae Sanctae Convegnum.

Among the scheduled interventions is that of ATS pro Terra Sancta, which will present to the Commissaries the activities carried out by the association and the prospects for the future. The Congress will provide an opportunity to deepen friendships and links between these “ambassadors” of the Custody throughout the world and ATS pro Terra Sancta, which since its beginning has been committed to serving the Custody with the objective of maintaining the Holy Places and supporting the Christian community in the Holy Land.