An exhibition about Jesus’ life in Capernaum 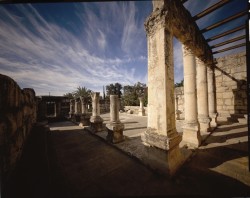 An exhibition about the life of Jesus in Capernaum will be organized on the occasion of the first Meeting for Friendship among Peoples in Rimini.

The idea behind this exhibition comes from the meeting between the Custodian of the Holy Land, Pierbattista Pizzaballa, with some friends of the Rimini meeting, many of whom have served as volunteers of the Custody of the Holy Land and ATS pro Terra Sancta.

The aim is introducing the historical fact of Jesus’life, its continuity and its topicality still today. His public life took place almost completely on the shores of Lake Tiberias and in Capernaum in particular, which is today a precious Holy and archaeological site guarded by the Franciscan friars of the Holy Land.

The exhibition is organized by a team of experts and friends, made by bible experts, scene designers, film directors, photographers, architects, engineers. The exhibition will have a large space and high visibility during the next meeting in Rimini, from Sunday August 21st 2011 to Saturday August 27th 2011, with the title “And existence becomes an immense certainty”.

The exhibition will be edited with the support of the Custody of the Holy Land, while ATS pro Terra Sancta participates with an in loco organizational contribution and with the time of their volunteers now in Jerusalem.

The Custodian of the Holy Land has been officially invited to introduce the exhibition during the August week of meetings and events. The conference will be held on Wednesday, August 24th 2011 at 5 p.m. The conference will be also attended by Jose’ Miguel Garcia, curator of the exhibition and professor of New Testament Exegesis at the San Damaso Faculty of Theology in Madrid.