An important day for Sabastiya: the signing of an agreement to support the local authorities in managing projects to protect the cultural heritage 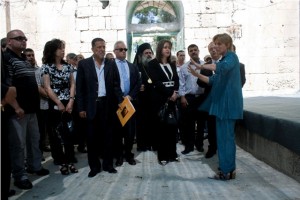 The atmosphere is festive in Sabastiya: small Italian and Palestinian flags are waving on the town square and already in the early hours of the morning the historic center is in a state of ferment. From small children to elderly women, from workers to the youths managing the guesthouse, everyone is eagerly awaiting the important guests of the day.

On 21 June the official ceremony took place for the signing of a Memorandum of Understanding with two ministers of the Palestinian authority – Khaled Al QComunicato Stampa Sabastiyaawasmi, Minister of Local Government and Rula Maaya’h, Minister of Tourism and Antiquities. The ceremony was carried out in the splendid setting of the large Crusader hall where works are still in progress – one might even say that what took place today was a “site visit” – and which will be used in the future as a conference hall.

The day’s events saw, in addition to the two ministers mentioned above, the presence of other important figures: Gianpaolo Cantini, Italian Consul General, Antonio La Rocca, Director of the PMSP (Palestinian Municipalities Support Program, a project of Italian Development Cooperation), Jibril Al Bakri, Governor of Nablus, and Mohammed Azem, Mayor of Sabastiya. Also present at the ceremony were the Greek Orthodox Archbishop of Sabastiya, Theodosios Atallah Hanna, and mayors of other Palestinian towns participating in the PMSP program.

Prior to the ceremony the large group visited the key areas of the project, guided by Carla Benelli and Osama Hamdan, collaborators of ATS pro Terra Sancta who for a number of years have been following the activities to recover and restore the historic center of Sabastiya. The Italian consul, the Palestinian ministers and the various authorities, followed by a large group including residents of the village, journalists and invited guests, visited the complex of the mosque, descended into the tomb of St. John the Baptist and then went to see the new discoveries brought to light by the works carried out in recent years: the Crusader chapels, and the outer fortifications and surrounding areas.

The group was able to visit the Guesthouse, which is the outcome of a project coordinated by ATS pro Terra Sancta, with support from Italian Development Cooperation, the Lombardy Region of Italy and the Cariplo Foundation. Shaded terraces for meals and simple but welcoming rooms… Everyone was impressed by the well-cared for appearance of this Guesthouse, which today is able to accommodate 13 guests and is entirely self-supporting thanks to the ever-increasing number of visitors. As ATS collaborator Carla Benelli explained, “For about three years the income generated by the Guesthouse has covered all of the expenses for maintenance and preservation, while providing employment for seven families in the village. This is an ideal result and reflects very well the idea behind the project. As Father Michele Piccirillo wished, a project such as this one in Sabastiya should not be limited to archaeological preservation, but should also involve the local community and spur them to take care of their own historical and cultural heritage, recognizing that this represents a precious resource.”

The Memorandum signed in the Crusader hall, following the various speeches of thanks for the works carried out, will provide the basis for an ever more fruitful collaboration among the parties, and represents an encouragement to continue along the chosen path: the two ministers of the Palestinian Authority have in fact pledged to create a committee to support Palestinian municipalities in the management of their cultural heritage.