“The situation is really extremely critical. Only today at least 40 shells rained down on Damascus… Starting from tomorrow we will be forced to stay in our homes, it is really too risky to move around Bab Touma these days”.

he message form Ayham, of the Association pro Terra Sancta in Syria to his colleague in Milan, needs no further explanation. It reaches us while approaching the days of the seventh anniversary of the beginning of the conflict in Syria. And reminds us that the war is not over yet, here and that in these days a tragedy is taking place in Damascus. The media reported a lot about it and recently the UN published a blank sheet to indicate that “there are no words for such horror”.

Ayham also sends us a report, attached to his short message. “I write to you while shells explode on the old city a few steps from here. Since the beginning of 2018, exactly since January 9, hundreds of mortar shells and missile shots have rained down on the Bab Touma neighborhood, where the Franciscan parish is located, and on the old city of Damascus, causing as many deaths and several injuries. February 8 was the bloodiest day: 72 shots in one day caused 20 deaths among civilians and 141 were wounded including many women and children “. This is a new massive offensive, launched by the rebels from the Al-Ghouta area a few kilometers from the capital city. A fight that became even more bloody since Sunday, February 18, because the army’s artillery began to fight back, again to the detriment of civilians. According to the UN data, it is the worst massacre in only one day since 2015.

During these years of conflict, the city had never seen such intense fighting and short episodes of violence and terror alternated with longer periods of peace. “From the beginning of this year, however, it is different. Right now – our staff member continues – when in Damascus we had started to talk about peace and reconstruction, and we had startet toraise our eyes to the sky again. Now that same sky is dropping back a wave of terror and the city has fallen into panic “. 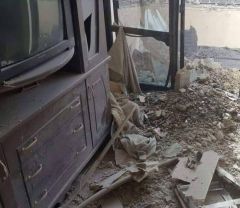 Ayham follows the implementation of emergency projects of ATS pro Terra Sancta in Damascus. Here, together with the Friars of the Custody of the Holy Land, the association follows various activities to help the local population, giving shelter, food and medicine to the victims of war, and cooperating with various hospitals to provide care especially to women, children and the elderly: those who suffer more these days in the bloodsed that is taking place in Damascus. One of the hospitals with which the association collaborates, the St. Louis hospital, has welcomed more than 94 victims of fighting these days. Among these, 6 were children under 12 and 9 are under 18.

“The situation – concludes Ayham – is terrible. Schools are closed waiting for future evolutions while each of us leaves in the morning every day to go to work fearing in his heart that he migh not return in the evening “.

HELP THE PEOPLE IN DAMASCUS!