Beginning and end of Christmas in Bethlehem | Pro Terra Sancta 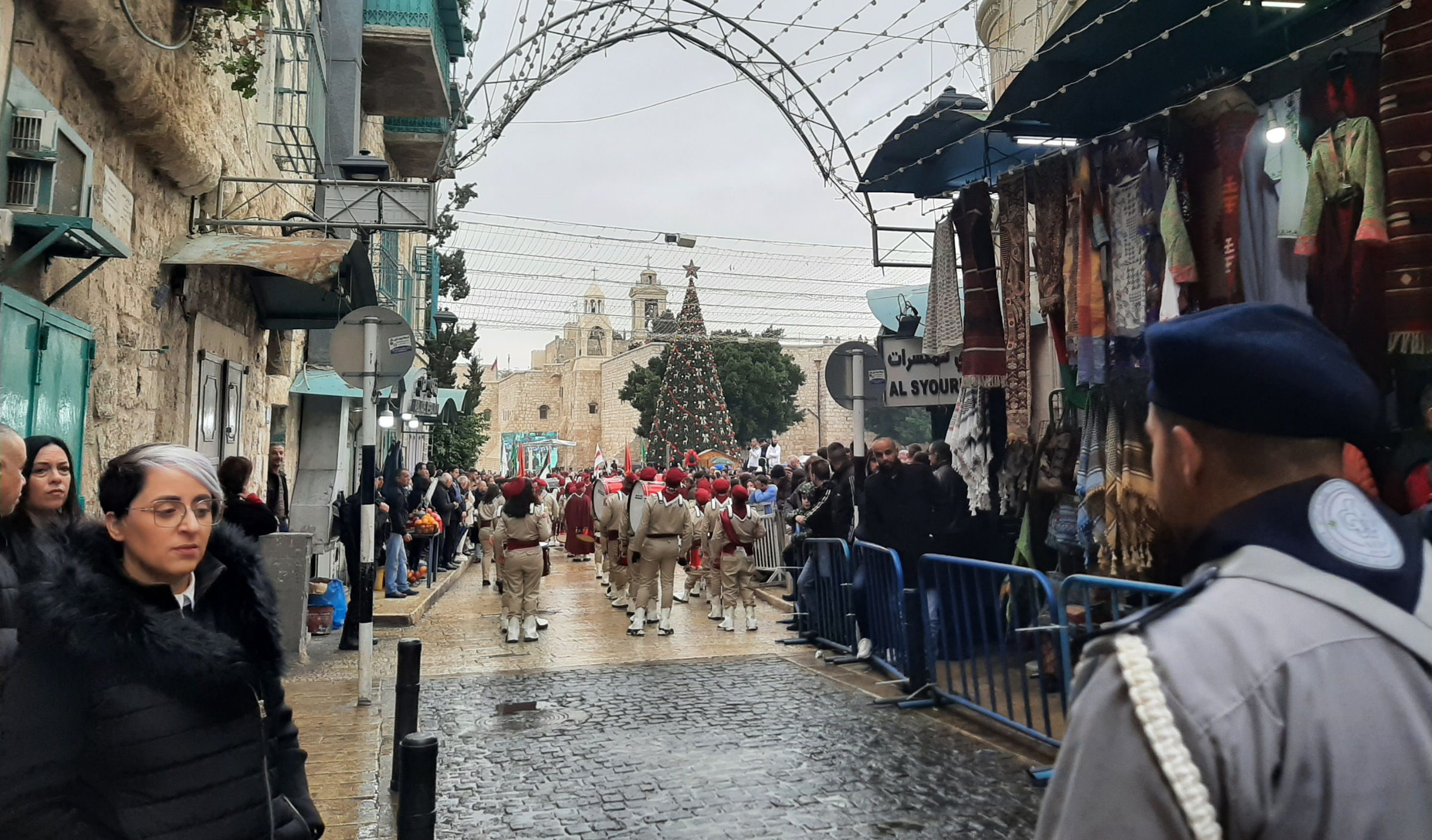 Beginning and end of Christmas in Bethlehem: Catholics and Orthodox celebrate it with joy

Bagpipes, drums, trumpets and flags were the backdrop to the festive day of Friday, January 6 in Bethlehem. Numerous scout groups from the Holy Land gathered along the streets of the Palestinian city to celebrate the Eve of Orthodox Christmas, which is celebrated thirteen days after the Catholic one. At the same time, the Gregorian calendar, followed by Catholics and Protestants, marks this first Friday of January the Epiphany of the Lord, welcomed by the entry of the Custos of the Holy Land, Friar Francesco Patton, into the Basilica of Saint Catherine.

Bethlehem was celebrating. Catholic and Orthodox Christians celebrated their feasts in order and harmony, without the risk of overlapping each other. This is possible every year thanks to the security forces and the Status Quo, which for almost two centuries has regulated the exercise of worship of the numerous Christian Churches of the Holy Land.

Despite the light rain, from the Via della Stella to Manger Square curious and faithful poured along the streets to film the procession of scouts composed mostly of Orthodox Christians, but also some Catholics recognizable thanks to the yellow and white flag of the Vatican.

The Custos of the Holy Land in Bethlehem

Despite the light rain, from the Via della Stella to Manger Square curious and faithful poured along the streets to film the procession of scouts composed mostly of Orthodox Christians, but also some Catholics recognizable thanks to the yellow and white flag of the Vatican.

The Basilica of St. Catherine was packed with faithful and authorities, such as the mayor of Bethlehem Hanna Hanania and the Consul General of Italy in Jerusalem, Giuseppe Fedele.

During the homily for the solemn Eucharistic celebration, the Father Custos recalled that “only if we learn to adore the child Jesus will we become authentic persons. Only if we put it at the center of our choices will our choices bear good fruit. Only if our will and love are in harmony with the will and love of the child Jesus will we be truly free.”

Brother Patton was present in Bethlehem in the Grotto of the Nativity since January 5, the day on which the Custody of the Holy Land begins the celebration of the Epiphany. The Christmas season for Catholics ends with the feast of the baptism of Christ, Sunday, January 8. The anniversary of the Epiphany for Orthodox Christians “scales” according to their Christmas, will be celebrated on Thursday, January 19.

The Patriarch of the Orthodox Church of Jerusalem, His Beatitude Theophilos III, entered the Basilica of the Nativity around noon, but even for us who were in the churchyard waiting for him it was difficult to glimpse him as he was surrounded by photographers, journalists and police.

The Christians of the Holy Land lived these days of celebration with joy mixed with bewilderment for what happened in the Protestant cemetery on Mount Zion. Last Tuesday, H.B. Theophilos III publicly condemned the crazy and very serious gesture stating that “our brothers and sisters are victims of hate crimes, our churches are regularly desecrated and vandalized and our clergy are subject to frequent threats and intimidation”.

Last Friday the Orthodox and Latin Patriarch met and embraced inside the Basilica and here you can see some pictures of the whole day. The celebrations for the Epiphany ended with the three laps around the courtyard of San Girolamo as tradition dictates. The Franciscan friars then gave incense and myrrh to the faithful and Friar Francesco Patton recalled that the gifts made by the three Magi are the sign that the baby Jesus is the most beautiful gift.

After Christmas, we hope that this Epiphany (Epihàneia – manifestation of divinity) will bring joy and brotherhood like the one that the young scouts have given us with their festive music.

Support our projects in the Holy Land
Precedente
Successivo