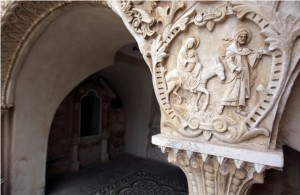 With our sincere thanks for the gesture of solidarity offered by this couple of friends of the Holy Land, we reproduce below their own words:

“Since the time of our engagement we have made many trips together, and even a few with our first two children when they were young. Then three more children came, and with them new responsibilities, work became ever more demanding and there was less money for recreation and travel. The years went by, quickly but intensely, and we came to a lovely milestone: 25 years since the day of our “I do” in front of the world and the Lord. A milestone that merited special consideration in order to express our gratitude, above all to the Lord, and to summon new resources for renewing our vows. A trip. It would be wonderful, also just to be alone for a few days! So it was that after a few organizational difficulties were dealt with, work commitments temporarily suspended and arrangements made for the children, we were able to take advantage of the long Carnival weekend to depart for a destination that was so eagerly desired and worthy of such an anniversary: the Holy Land!

It was only for several days but they were very intense ones, experienced with friends who had already visited those places or had lived there for some time. They guided us to the most important places with the desire to let us experience for ourselves a faith that was to find confirmation in that land and become even more real and concrete. At the same time we were confronted with a political and social reality which made us all the more aware how critically important, and at the same time difficult, is the Christian presence in those places. When it was time for us to leave, at the airport we were subjected to rigorous controls and exasperating waits. But this was by no means the most difficult part of leaving these places that now belong to us, and to which we ourselves belong for the history that links us to Jesus, Mary and the Apostles.

This Land, its scents and its contradictions have remained within us. For this reason, on our return, at the party with friends and relatives to celebrate our wedding anniversary, we requested guests not to give us presents but instead to make a donation to support the Christian presence in the Holy Land. To our great surprise all of them consented, and with great generosity. We are therefore joining with our friends by sending this donation, along with our prayers for this land and for all of the Christian people there.” Barbara and Gianni.