Christian celebrations in the Holy Land

If you ever had the opportunity to spend some time in the Holy Land, you were probably a little disappointed when you found practically all the shops and restaurants run by Jews, closed on Saturday. Or you might have wanted to sleep an extra hour on Sunday, but you probably had to give up on your purpose having been woken up by the insistent traffic of a normal working day or by the children shouting on their way to school.

This is because in Israel the week follows the Jewish order according to which the Shabbat (from which Saturday) – that starts from Friday afternoon and lasts until Saturday at sunset – is the a day of rest and it is not allowed to carry out activities of any kind. In other parts of the Holy Land, in Palestine or in Jordan for example, you would certainly find many shops closed on Fridays instead, because it is the day of prayer and rest for Muslims.

Unlike Europe, religion and society are closely connected in the Middle East. There is no clear distinction between religion and civil life, neither in Israel nor in the Arab states. Consequently if it is established that one day it is forbidden to work, nobody (or only a few daring) will break this rule. The same is for holidays, which are particularly respected. 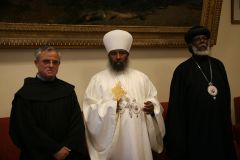 As everyone knows, the Holy Land is also the land of Jesus and therefore Christians have lived there for centuries. Christians rest on Sundays, as in the West, but being a minority (1%) they often find themselves having to follow other rhythms.

Before we start to talk about the Christian Celebrations during Easter period, however, it is necessary to take a step back and add another detail: Jews have their own solar calendar, Muslims follow another, which is lunar and Christians have five different ones. Therefore we find seven different calendar systems in the Holy Land. 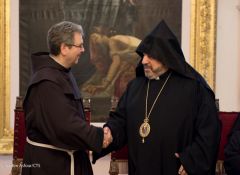 When we talk about the Christians of the Holy Land, we refer more generally to all those confessions which have in common the fact of believing in Christ, yet they also have very many differences between them. There are at least 12 Christian denominations, but we will only see the main ones, linked to the five different calendars. For all of them Christmas and Easter are the main events, but the dates in which they occur almost never coincide.

Given the large number of different calendars it is easy to imagine how high the probability is of hitting on some holiday in unexpected days. Thus, for example, during the Easter period at the Holy Sepulcher of Jerusalem, a procession of Latin Catholics would take place, celebrating an anniversary. A few days later, you would meet the same procession of Armenians, then the Copts and so on.

The most heartfelt feast by the Christian communities in the Holy Land is Easter, especially in Jerusalem in the Old City, where it becomes almost impossible to move in the streets. As one can well imagine, the Passion, Death and Resurrection of Jesus are the center of Christianity and there are many who want to commemorate these events in the place where they happened.

As we also read in the Gospel, Easter is originally a Jewish holiday, the Pesah that recalls the evening before the liberation from Egypt and is linked to the lunar cycle. For this reason it falls 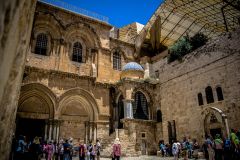 It is very difficult for the Latin Easter date to coincide with that of the Orthodox one. It rarely happens, it happened in 2017. This is because while Christmas has a fixed date (December 25 for Latin Catholics and January 7 for Orthodox), Easter doesn’t. This year, for example, the Latins celebrate Easter on the 21st of April, while the Orthodox celebrate on the 28th of the same month. The difference will increase considerably in 2021 because the Latins will celebrate on April 4 and the Orthodox on May 2. The algorithm is complicated, but if you are curious:

you may calculate the date here 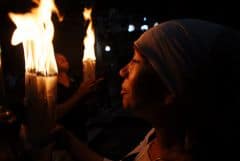 The Orthodox and the Armenians also have a special celebration for Holy Saturday at the Sepulcher: the ceremony known as the “Holy Fire” or the “Holy Light“. The first evidence of the appearance of the Holy Fire dates back to the 4th Century. It symbolizes the light that illuminated the Sepulcher of the Lord after the resurrection of Christ. The church of Jerusalem in the first centuries of Christianity celebrated the blessing and the evening lighting of a lamp before the Easter function. This custom gradually turned into the “miracle of the Holy Fire” ceremony.

According to tradition on this occasion a miracle happens: a fire descends from the sky (sent by an angel) and lights the candle held by the Patriarch who then spreads the light to other candles of the faithful crammed in the Sepulcher.