Emergency education: presentation of the ATS and AVSI project 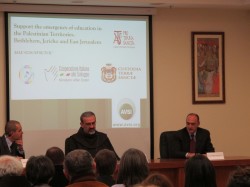 Not only modernization of infrastructure, but above all an improvement and updating in teaching methods in order to keep pace with the times: these are the objectives, highlighted by the Custos of the Holy Land and President of ATS pro Terra Sancta, Father Pierbattista Pizzaballa, of the three-year project that will focus on Terra Sancta schools in East Jerusalem, Jericho and Bethlehem. Father Pizzaballa, on the occasion of the official presentation of the project sponsored by ATS pro Terra Sancta and AVSI, and co-financed by the Italian Ministry of Foreign Affairs, noted the overall importance of schools, and the education system in general, for the region. “Christian schools are today open to all, and represent an important reference for the entire educational system in the region”, the Custos declared, stressing the necessity of continual modernization and updating in order to accompany the changing generations. “It is not a case”, he said, “only of improving the infrastructure, but also of modernizing and improving teaching methods, in order to help the students to become capable of playing an active role within this society, which is one of constant change”. A notion that was also stressed by the representative of the Palestinian Ministry of Education, Basima Abu El Kheir, who noted that education always represents a key element in the education of a nation and in the attainment of peace.

According to Father Pizzaballa, the first step in this direction is the project that started in November 2010 and that will involve, according to Alberto Repossi, the head of the project, 3,100 children from 3 to 17 years of age, 300 teachers and social workers, and about 200 parents out of a total of 1,040 families. A project that, in addition to providing a large space for the training of teachers and for extracurricular activities for young students, provides for a phase of discussions and evaluations, with the specific aim of promoting a process of constant updating. “We are conscious of the role that we are playing in both physical construction and in the development of future Palestinian society”, sated Father Abdel Masih, director of the office of coordination of the Terra Sancta Schools, explaining that in 15 years 3,125 future families will have been educated in theTerra Sancta Schools.

“To not give a child the opportunity to study in order to achieve a better future is an international crime”, declared the Italian Consul General Luciano Pezzotti during the conference that inaugurated the project, noting the value and importance of the activities being developed over the coming years, in particular the allocation of 550 scholarships for students suffering from economic difficulties. “The Christian presence”, he declared “is an important aspect that should be preserved above all in this part of the world and, particularly, in this city”.

Frattini in the Franciscan school at Jericho (November 2010)

Support the Holy Places and the Christian presence in the Holy Land!

You can help the children and students of the Holy Land by donating: