Holy Land Mosaics: the exhibition through the eyes of the children | Pro Terra Sancta
Uncategorized

Holy Land Mosaics: the exhibition through the eyes of the children 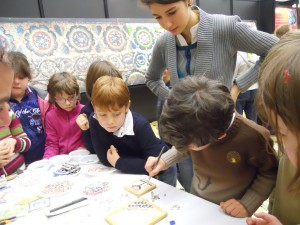 Amazement, curiosity, enthusiasm: here below are the writings by the children who participated to the creative workshops to understand the art of mosaics, during the exhibition “Holy Land Mosaics”, held inMilanfrom December 6 to December 16.

“We went to the mosaic exhibition and I liked having Rasmi teaching us how to create mosaics. Alessandra, our guide, told us that in the VII century there were mosaics” (Lorenzo B.)

“I was quite struck with the guide’s explanation about the fruits and the crescent moon and I liked when Rasmi had us placing the small stone tiles”. (Emma)

“I enjoyed doing the mosaics with my friends, following Ramsi’s explanations. The guide told us that those mosaics were copied from two churches, called Mosque and Christian church”. (Alice)

“Alessandra showed us the mosaics and Rasmi showed us the tiles, each one of us placed one tile, I liked it very much”. (Lorenzo V.)

“At the mosaic exhibition Rasmi showed us how to use a special glue to place  the small pieces of the mosaics, he creates mosaics with his friends. The guide explained they had done one mosaic in three months”. (Marcello)

“I liked the mosaic exhibition very much because we tried doing the mosaic, by placing a small tile into an existing mosaic. I liked all the patterns I saw because there were lots of gold and bright colours and the mosaics pictured lots of fruits, such us grapes and pomegranates”. (Riccardo C.)

“I liked the exhibition very much because there were so many beautiful mosaics. I liked the ones from the Mosque a lot because I was lucky enough to take a closer look, and I especially liked all that gold”. (Giulia T.)

“I liked all the mosaics, but my favourite was the palm tree. I liked it because of its bright colours”. (Arianna C.)

“On Friday we went out and saw the mosaics created by a man fromJerusalem, I liked this experience very much! I liked the most the mosaic picturing a tree, with bright colours, made with a lot of imagination”. (Martina S.)

“I liked the palm tree because of its bright colours and the many fruits and flowers”. (Matteo P.)

“I liked the exhibition very much and I liked the best the mosaic with the Muslim symbol because it was full of fruits and flowers”. (Alessandro R.)

“Laura explained that it takes at least one month to create a big mosaic, one week for a small one: they showed us all the marvellous mosaics with leaves, fruits and the flower baskets”. (Giulia S.)

“Rasmi had us place some small tiles made of precious mineral stones and we asked many questions”. (Grazia)

“ I liked when Alessandra showed the God of the Sea. For me gluing the tiles was a hard job” (Davide R.)

“ I was struck with that kind of tree trunk with grapes, pomegranates and the symbol of the moon with the sun inside and the stars around” (Alessandra)

“When I went to see theHoly Landmosaics, I saw the crescent moon and also a plant with its bud, and leaves with fruits inside. The last vase I saw was upside-down”. (Chiara)

“ One of the mosaics was made with glass tiles fromVenice. There were stones, not in glass, fromBethlehem. The guide told us they had a tool to create the tile edges.” (Giorgia)

“What struck me at the mosaic exhibition was Rasmi cutting the tiles without cutting his finger. And also Laura explaining that to carry the mosaics by plane they had to split them”. (Tommaso D.)

“Explaining the exhibition to the pupils from the second and fifth year of elementary school consisted mainly in looking at the mosaics together and asking ourselves what we were seeing. It’s striking how the kids can remember so vividly what they do. While I was watching them learning how to place the tiles with Rasmi, I could see beautiful amazed expressions on their faces.”. Laura, the teacher.