Human experience, of study and discovery: the story of Davide, volunteer in Jerusalem | Pro Terra Sancta

Human experience, of study and discovery: the story of Davide, volunteer in Jerusalem 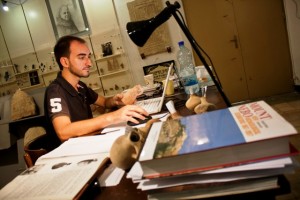 Come to their fourth month in the Holy Land, the Italian boys involved in the Civil Service year thanks to an arrangement between ATS pro Terra Sancta and the University of Bari tell their stories, the activities they carried on and their impression on life in Jerusalem.

Following is the story of Davide, involved in a study and cataloging activity of the archaeological heritage of the Custody of the Holy Land, by the Museum of the Studium Biblicum Franciscanum.

“The beginning of each new adventure is always the most difficult part, but at the same time the one that drags me the most from an emotional and sensory point of view; and you see, in these three months in Jerusalem I experienced a lot of feelings. I already spent the last summer here in this city and for me the biggest wish I had when departing was to know new people, live and have a revival of place and situations that I’ve only savored. After ninety days I can say it was exactly like that, and I hope it’s going on to be like this.

The first words that come into my mind when I’m thinking of these four months are friendship and discovery. A friendship experienced in its full with my three adventure pals, Nando, Giuseppe and Alessandro. Together with them and with the other guys living in Maria Bambina, we took part in many special moments among which there was the one in preparation of the Christian Easter: sharing, waiting and prayers culminating in the joy of being together having lunch on the roof.

The other important thread I can think of to connect with friendship and that has been guiding me in these months is that of discovery. A discovery created by meetings and knowing new people, lived in the first place at the Studium Biblicum Franciscanum, where I carry on my civil service. Since the first days of our arrival, the secretary and the professors made themselves available and supportive with me and Giuseppe. They made it possible for us to enroll at the faculty as examination candidates, allowing us to participate to the biblical archeology lessons, to the archaeological excursions and to the study-trip in Jordan. We created acquaintances and links to every student; and we set them with common lunches at the Studium and with other convivial moments like dinners and barbecues. Meeting them, who came from all over the world, made it possible for me to know their culture too and to have a clearer idea of how it expresses itself in Mexico, India, China, South America and in many other countries.

Moreover, in these months the most gratifying “discoveries” happened with the study and cataloging of the collections of the archaeological Museum of the Studium Biblicum Franciscanum. The materials I studied were many and heterogeneous, from the several lamps to the bronze liturgical objects from the Byzantine age; currently I began the study of the Palestinian ceramics of the Canaanite age. The profitable and stimulating meeting with the museum director, father Eugenio Alliata ofm, is enriching me every day, humanly and scientifically. A way to implement my knowledge of the archaeological materials and to understand the big importance of archeology in this land and how it can translate in a tool of knowledge, respect and dialogue, if properly questioned. Concerning this, in this period is also born the idea of creating a monthly bulletin about the activities of the museum, an informative, and at the same time popular, means, because I think the activities and discoveries should never remain only sterile achievements but should became live interest.

What do I expect from the next months? I expect to increase these discoveries and relationships, especially with the meetings, also with tourists and pilgrims visiting the museum that are asking for news and informations with growing curiosity; to give them aid and receive their smile as great reward, suggesting me that the service I’m carrying on here is really useful.