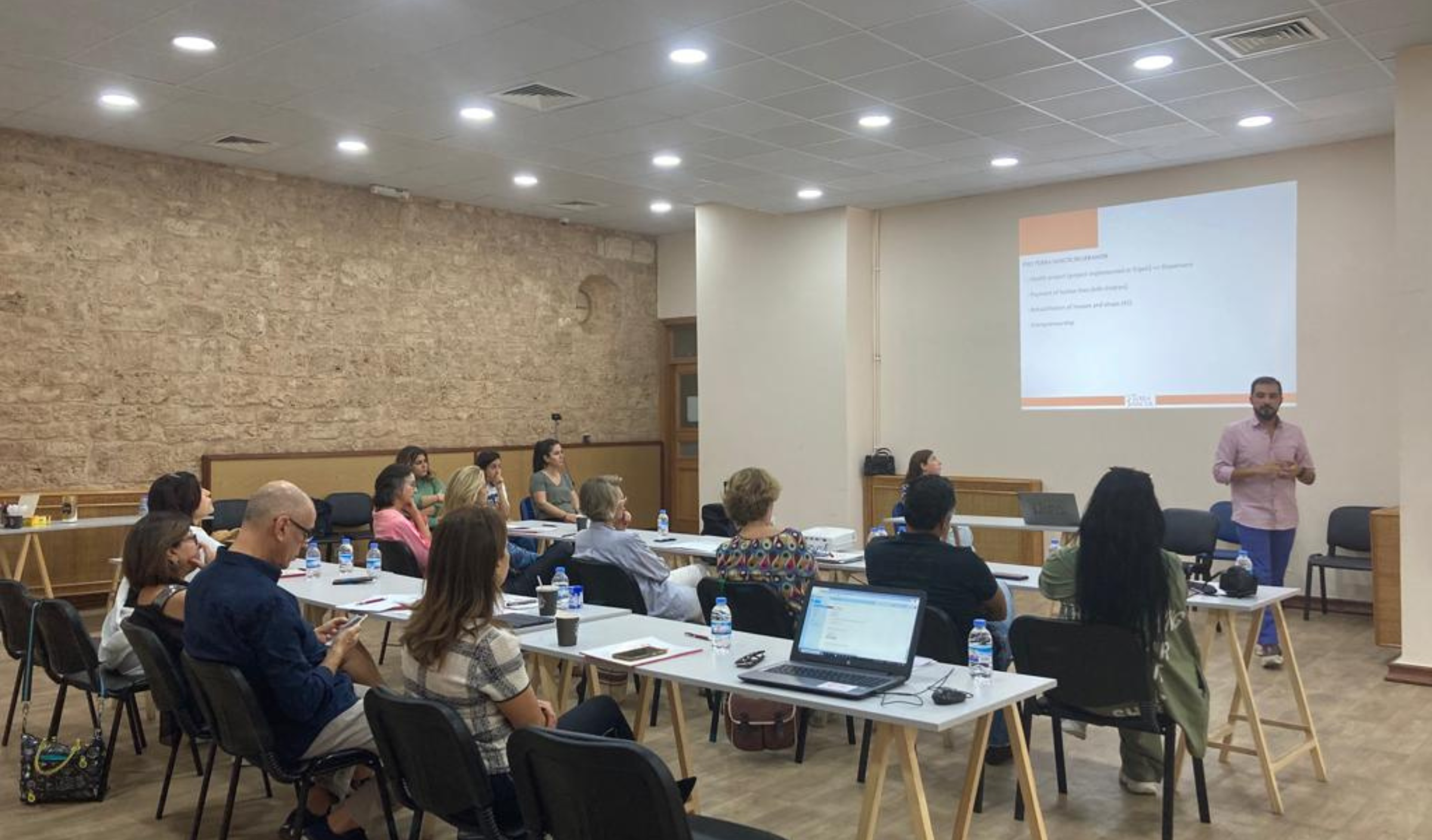 “WIP – Work in Progress”, a vocational training project aimed at all Lebanese who want to enter the world of work and come across entrepreneurial and professional realities, ended in recent days in Beirut. In a collapsing country, WIP wants to offer people with very low incomes the tools to deal with the severe economic crisis and bring home a salary sufficient to feed their family.

The hope of finding justice, job opportunities, food security and medicines seems increasingly distant. It is alarming the number of families who have had to interrupt their children’s education due to lack of money or who have stopped treating themselves because they cannot pay for medical visits.

In a country where 87% of families suffer from malnutrition, Pro Terra Sancta wants to try to give concrete hope to the many Lebanese who, despite everything, want to do and overcome this crisis.

The responses from the Lebanese population to the WIP project of Pro Terra Sancta were very positive and many young people presented themselves with their ideas of micro-entrepreneurship.

These ideas were selected over the course of three months by a selection committee composed of five Italians and two Lebanese who met on Tuesday 18 October to finance the projects and reward the winners.

We asked the Chairman of the Selection Committee, dr. Paolo Fumagalli, to tell us about the project and how you lived these days in Lebanon.

Dr. Fumagalli, returned a few days ago from the mission in Beirut to coordinate the implementation of the “WIP – Work in Progress” project. What Lebanon has seen and how do you think this project can help?

I saw Lebanon in very difficult conditions. People who used to have a normal life, were neither rich nor poor, are now in a condition of great poverty and many are very young.

The explosion at the port of Beirut added to the suffering and brought to their knees thousands of families who had made great sacrifices to let their children study.

I was very impressed by the emigration from Lebanon. In 2019, 1,500 Lebanese pounds were needed to buy $1, today you need 40,000. It is clear that those who have the opportunity emigrate abroad. There are 12 million Lebanese outside the country; Everyone and I mean everyone has someone who lives abroad. It is the diaspora of Lebanon. The economy is out of control, household savings are stuck in banks.

It’s a beautiful country with amazing people. Today it is totally jammed.

Here the projects of Pro Terra Sancta are promoted and managed by very good people who are convinced of the good of what they do. The projects in Lebanon mainly concern health, education and the distribution of medicines.

The WIP project is a bit special: thirty people who have demonstrated entrepreneurial skills and resilience skills have been selected to complete a professional training course in which to deepen the tools of a micro-entrepreneur. At the end of the path, everyone presented his idea in front of a jury composed of five Italians (including me) and two Lebanese. The jury decided to support the best eight.

You will therefore have known many stories related to this WIP project. Tell us some that struck you.

One of the best stories for me is that of Habib, an 18-year-old boy who proposes to create an app about sports. It works like this: the user downloads the app and by signing up becomes part of a large community to which he communicates which sport he likes to practice and when it is available for a game. The app informs you which of the twenty-five playgrounds is available to play basketball, volleyball, tennis, paddle, soccer and other sports and how many are playing. So, if for example a player is missing for a football match, the app notifies you, you book and you reach the team made up of other boys and girls. It’s beautiful because it promotes sociability, it creates a network.

Another beautiful story is that of a 23-year-old guy who everyone calls Jimmy Generator. His idea is to rent generators that he loads on his truck and in turn rents them for special events such as parties and ceremonies. It is an energy delivery. Everything goes to diesel in this country.

You see, they are young guys, but with pretty clear ideas. These are all stories of entrepreneurship.

Then we financed the project of two mothers: one of them had lost her job at a company that produces peanut butter. She said to herself: “They fired me, I’m out of work, but I know how to produce, I know the know-how and I have contacts with supermarkets”. She decides to continue making peanut butter with a friend. The support of Pro Terra Sancta will help you with the purchase of raw materials and material to be able to increase the number of cans to be produced and therefore sold. In doing so, the two women are earning the same income they had before losing their jobs.

Similar is the story of a lady who sells ready meals to friends and neighbors to bring money home. The WIP project will support the costs of purchasing raw materials, new pots and pans and a refrigerator. So that the lady can prepare 50 meals a day and get a sufficient monthly salary for her and her children. That’s a good thing.

These activities are all funded by the Work In Progress project. How important are they and what does it mean to you to be part of the jury?

They are a fundamental economic support for the family. All these are classic examples of microcredit for which a person, thanks to a little help, can launch a business and thus have an important economic income that he did not have before.

I have met many people who want to put their hands in the dough and start again. And Pro Terra Sancta is a great opportunity for them to restart.

You know, I started with my ideas. I had an impact with a very different, very complicated reality, where there are so many nuances to understand and understand.

The jury of the next editions will play a very important role. It is not just a matter of making a judgment and choosing to whom to give and not to give. It is a matter of giving help, real support even to those who have not won! Because we must recognize that they have done a very important activity: in such a situation anyone who wants to get involved in my opinion must be rewarded.