Magnificat: the opening of the Jerusalem music school’s new premises 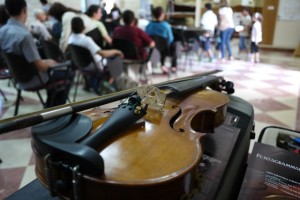 For the music school in the heart of the Old City of Jerusalem, which ATS continues to support with the project “Magnificat – Music in the Holy City“, Tuesday 4th September was an important day. The Custodian of the Holy Land Fr Pierbattista Pizzaballa officially opened the institute’s new premises in the convent of San Salvatore in the presence of the Consul General of Italy in Jerusalem, Giampaolo Cantini, and a delegation of the project’s sponsors, including the councillor of the Cooperation for the Development of the Marche Region Luca Marconi, the mayor of Maiolati Spontini Giancarlo Carbini, the chairman of Premio Vallesina Gianluca Fioretti and a large group from Italy.

As it emerged from the meeting that preceded the official opening, Marche’s support of the Custody of the Holy Land’s music school is motivated both by sharing the mission of the Magnificat Institute, a symbol of tolerance, peaceful coexistence and teaching excellence in Jerusalem, and its proximity to fellow countryman father Armando Pierucci ofm, founder and managing director of the Magnificat. “A father in the true sense of the word – Father Pierbattista Pizzaballa said in his address – who gives not only bread but also spirit to his students, teachers and staff. Here in the Holy Land we always talk about projects, centres, treaties, but above all we need the spirit that brings them to life, which is what father Armando provides in his school.”

The project was designed by engineer Roberto Mancini, who, together with engineer Ettore Soranzo from the Custody of the Holy Land’s technical office, has taken care of the technical and organisational aspects of the work. This has involved the major restoration to and drainage of the classrooms – housed in a basement vault – which will now be fully dehumidified and equipped with an innovative air conditioning system of Marche production. Completely new spaces will also be built to hold the recently established academic courses recognised by the Italian Ministry of Education, namely the new offices, a new library, a multipurpose room, a multimedia room and a practice room for the choir and the orchestra. “The work carried out – said the engineer Mancini – together with the efficiency of the structures will leave Jerusalem with a symbol of Marche technological culture.”

The Premio Vallesina association has been the driving force behind Marche initiatives in support of the Magnificat since the year 2000. “When I met Fr Armando in Jesi in 2006 – recalls the president of the association Gianluca Fioretti – I thought that the project we’re inaugurating today would to represent the completion of a journey, but now I like to think of it as a step in a relationship that will continue.”

The municipality of Maiolati Spontini (Ancona) contributed a large sum, but, as pointed out by mayor Giancarlo Carbini, “the relationship between Maiolati Spontini and the Magnificat Institute is not limited to financial support; it is in fact essential in cultivating virtuous cultural exchanges that build an international bridge between wounded cities such as Jerusalem and Sarajevo, protagonists of the ‘Pentagramming peace together’ initiative, which we strongly support.”

“I hope that our commitment will continue – said councillor of the Cooperation for the Development of the Marche Region Luca Marconi – and become a symbol. ‘Magnificat’ is simultaneously a name and a programme of spirit. The project that the Marche region supports economically, fitting into the mission of the Magnificat, favours this ‘economy of the spirit’ in a city like Jerusalem that is so important to us Christians and to other religions. I thank father Armando for having set up this school right here, which is a sort of interreligious club.”

The conclusion of the meeting was given to the Consul General of Italy in Jerusalem Giampaolo Cantini: “There’s a palpable sense satisfaction around this project concerning the Magnificat in this room – said the Consul – Even though I’ve only been in office for a few months, I’ve found that Italy is always there when it comes to important initiatives.”

After the presentation meeting, the Custodian of the Holy Land blessed the new premises, which were visited by everyone present. The participants went into the Auditorium of San Salvatore, where the head of the school Hania Soudah Sabbara presented the concert, starting with the D274 Steinway piano donated by the Premio Vallensina. After Father Armando Pierucci thanked all the representatives of the institutions present and the people who were majorly involved in supporting this project, the evening ended with a concert by the International Youth String Orchestra conducted by maestro Stefano Campolucci, which brought together students from a number of music schools, including Ancona, Jesi, Senigallia, Sarajevo and – of course – the Magnificat.