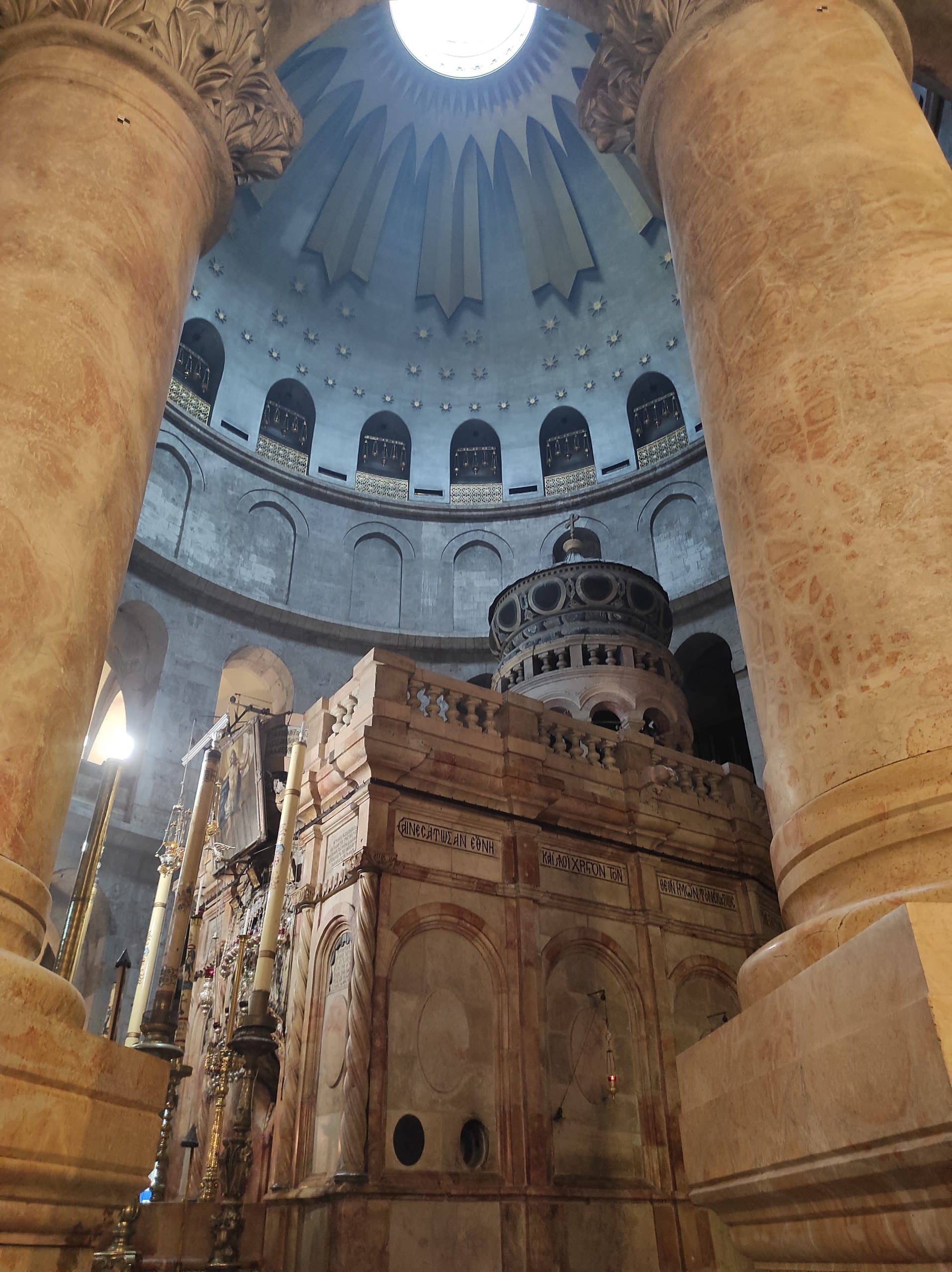 Mysteries of the Holy Sepulchre: skulls, pagan temples and sigils

The Church of the Holy Sepulchre is the heart of the Christianity and of Jerusalem. Here took place the passion, death and resurrection of Jesus Christ. That’s why, today as in the past, the church was a must-be place for all the pilgrims.

Today we would like to discuss big and small curiosities about the history of the Holy Sepulchre. Keep them with you on your next trip in the Holy Land!

Golgota’s skull and the only church with a mountain inside

“They brought Jesus to the place called Golgotha” (Mark 15:22)

In Aramaic it’s Golgotha, in latin Calvarium. Both are names for the “place of the skull”, the mount where Jesus was crucified. It’s almost unbelievable, but a 5 meters high hill has been incorporated in the Holy Sepulchre.

nude rock of the Calvary can still be touched by putting a hand inside an opening underneath the greek-orthodox altar of the Crucifixion. According to tradition, this is also the point where the cross was raised.

Here, in the moment Jesus died, an earthquake splitted the rock -now enclosed in a glass display- and allowed the sacred blood to get to Adam’s skull, lying beneath, and purify him.

Where is Jesus’ real tomb?

“At the place where Jesus was crucified, there was a garden, and in the garden a new tomb, in which no one had ever been laid.” (John 19:41)

During the British governatorate, some protestant scholars pointed out an alternative burial site to the Holy Sepulcher: the garden tomb, a few meters from Damascus’ Gate.

Here there is a hill that, at certain times of day in certain seasons, resembles a skull when hitted by the sunlight. Here a tomb carved in the rock with a round stone for closure was found nearby an ancient wine press.

The archaeological evidence supporting the Golgotha being Jesus’ tomb is way more solid: the site was outside of the city wall and was used as a cave. The cave was dismantled in the I Century BC. and it became a garden with some tombs.

Then, in order to sedate any jewish insurrection, in 103 AC the emperor Adrian founded the city of Aelia Capitolina on the ruins of Jerusalem, previously destroyed by Titus. At the centre of the new city there was the Golgotha and the new temples of Jupiter and Venus concealing the sacred christian landmark.

The first church in the world?

The Holy Sepulchre is not the first christian church of the ancient world but it’s the first builded by an emperor. After appointing christianity as the State’s religion, Constantine ordered some excavation to isolate the tomb of Christ and surround it with a huge round called Anastasis.

According to some chronicles, the original burial, enclosed in a temple called Aedicula, was completely destroyed by Calif al-Hakim in 1009. It is true that the marble slab where today many are praying is dated to the 14th Century.

In 2016 the Aedicula was restored and a group of archaeologists opened up the tomb. Under the marble slab they discovered another one, grey and broken with a cross carved on it. The second slab protects the original limestone layer.

The last time something similar happened, it was 1555 when the Custodian of the Holy Land Bonifacio from Ragusa decided to build another aedicula. Once the alabaster slabs were lifted, the Franciscans saw the stone guarded by two frescoed angels.

At the centre of the tomb there was a wood piece covered by a gilded tissue and a title block of empress Elena, mother of Constantine. Exposed to air, frescoes, fabric and wood vanished.

The actual aspect of the Holy Sepulchre is due to a sequence of building, destruction from wars, fires and earthquakes and restorations. Many great names wanted to be connected to the heart of Jerusalem.

One of them was the byzantine emperor Constantine the Monomakhos that rebuilt some chapels on the site of a Holy Sepulchre completely dismantled by al-Hakim.

In order to quickly finish the constructions, he reused some materials recovered from Jerusalem’s buildings in ruin, a church consecrated to the Virgin Mary in particular. The building was wiped out by the Persian invasion in 614 AC. Constantine used its capitals for the new Anastasis.

The capitals are decorated with a monogram, a sigil composed by the letters of the names Mauritius, byzantine emperor from 582 to 602 AC, Constantina, his wife and Tiberius and Theodosius, the couple’s sons.

The intricate sigil was only recently deciphered. Today the capitals, another piece of the history of Christianity now jealousy keeped in the Terra Sancta Museum’s deposit, are in desperate need of restorations.

Many pilgrims walked the paving of the Holy Sepulchre. Many touched the stones living with faith and history. Now is your turn to just do so: help us complete the restoration! Link your name to the Holy Land and the most mysterious of the churches forever!

Let’s restore the objects of the Holy Sepulchre
Precedente
Successivo