“This new house is a stroke of God to my life.” Mrs. Mayada kept on repeating it while she showed us her house. She told us when she welcomed us, clasping our hand with both hands, and bowing slightly; and she repeated it as she led us to her brand new white balcony, to show us the rubble all around and on the sides of the street under her apartment. When the city was still occupied, that street was the border between West Aleppo, that was occupied by the government, and East Aleppo, the red zone controlled by rebels and Al-Nusra.

“The bombs in those days fell like hail … and there, right there, the ISIS snipers where hiding” she said pointing at the remains of other balconies next to hers, and some holes where once there were glass doors and windows: “they were our neighbors”. For this reason Mrs. Mayada left her house and went to live with some relatives in the west side of the city. 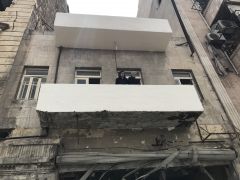 Then, in December, the city was freed and people started talking about reconstruction, rebirth. Thanks to the help of the Franciscans, with the support of Association pro Terra Sancta, they began to rebuild some apartments where possible. Mayada’s home was one of the first to be restored. And while the specter of war is still widespread all around, her white apartment in the ocean of rubble truly is a “stroke of God”, in the middle of destruction and despair. The data we have confirm it. 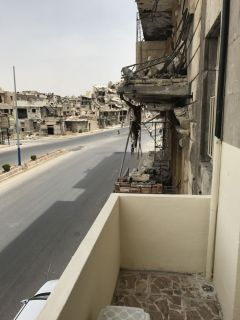 Of about four million people in Aleppo, three left the city during the conflict and only have started to come back only recently.  Among those who reamined there were mostly women, the elderly and the children. Many men lost their lives in combat, and many still fight in Assad‘s army. Like Hussam, the son of Mayada, who is still fighting in the army. In addition, there is 85% of unemployment rate and 95% of households live below the poverty line and many of them still do not have a home.

Here the Franciscans, assisted by the Association pro Terra Sancta and the many friends and supporters, have really done a lot. Yet, of the 900 housing reconstruction requests, only 10% was accomplished through the activities of the friars and with the support of various friends and supporters.The price for the reconstruction of an apartment varies from 2,000 to 3,000 euros, therefore there is much that still needs to be done. For this reason, together with Mayada, her daughter and the community gathered around the Friars of the Custody of the Holy Land, we strongly urge you to join the campaign “New Homes for Aleppo” to help with a small offer to bring a small “stroke of hope” to the families in Aleppo.