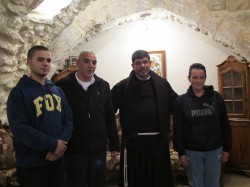 Celebrations in the Christian district of old Jerusalem for the inauguration of a house entirely renovated and restored by the Technical Office of the Custody of the Holy Land. Before being renovated in the framework of the project “Jerusalem, Stones of memory” promoted by ATS Pro Terra Sancta, the house was in extreme hygienic and sanitary degradation because of a sewer pipe and a waste dump inside and  a lack of adequate space to host the large family inhabiting it. “Nine people would live in 50sqm, whereas today, after the renovation, the space is 120sqm, thanks to the recovery of the underground rooms” says Ettore Soranzo, engineer of the technical office of the Custody of the Holy Land, describing the situation before the intervention. Water dripping everywhere, whole spaces abandoned and full of waste and filth: an unbearable situation. And then, while renovating, the surprise: between the re-cleaned walls and the spaces renovated and restored, a part of a Byzantine building came out, the historical value of which is recognised also by the Israeli authority for antiques. The house today is a real jewel and those who had seen it as it stood before can hardly recognise it now.

The inauguration was attended also by Father Ibrahim Faltas, Bursar of the Custody of the Holy Land. He underlined the importance of the support given by the Franciscan friars to the presence of the local Christians and he expressed the necessity to continue finding land and houses for the people in need. “The Custody of the Holy Land possesses about 500 houses in Jerusalem needing renovation and works: in 2010 around 30 have been renovated for a total investment of about 2 million USD” he declared, recalling the official handover of 69 apartments to the poorest Christians of Jerusalem.

Support the Holy Sites and the Christian presence in the Holy Land!