Pizzaballa: ‘Pilgrimages to the Holy Land are safe’ 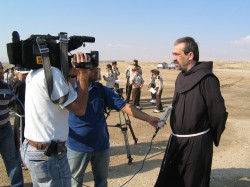 ATA pro Terra Sancta has recently made available to tourists “The Pilgrim’s New Guide” to the Church of the Holy Sepulchre (which will shortly be viewable online). For a number of years the association has supported archaeological excavations and restoration activities in the village of Sebastia, promoting sustainable tourism that has aided Palestinian development, notably through the management of the Guest House in Sebastia.

ATS pro Terra Sancta has also promoted the museum of the Studium Biblicum Franciscanum through its project “Telling the Story of the Holy Land”, whose ultimate goal is to bring into being a modern Christian museum center, envisioned as an integrated complex of communications and cultural production serving pilgrims, tourists and scholars visiting the Holy Land, as well as the local population. A museum that will make better known – through guided tours – the story of the Christian presence in the Holy Land and the Custody’s history in fulfilling its mandate to preserve the traces of Christ and the first Christians in the Holy Places.

A meeting yesterday in Milan offered an analysis of the situation in the country, with attendees including the major tour operators in the north of Italy that specialize in religious tourism.

Also present at the meeting were Tzvi Lotan, Tourism Advisor at the Israeli Embassy, Alberto Corti, Director of Federviaggio, don Luciano Mainini, Secretary-General of the Italian Pilgrimages Secretariat, and representatives of the principal tour operators in the north of Italy specializing in religious tourism who provided their own testimony on the subject.

Alberto Corti confirmed the positive security situation in the country. “I don’t see any reason for worry or for altering the destination”, the director of Federviaggio emphasized. “We are speaking of a land blessed in all of the senses, of a ‘beneficial contagion’ that is shown by the 2010 data from the World Tourism Organization, with 2.8 million foreigners visiting Israel, representing a 21 per cent increase over 2009. And this compared to an increase in world tourism in 2010 of only 7 per cent, and around 3 per cent in Europe.”

Among the data cited by Corti was that of expenditures of tourists who visited Israel in 2010, nearly 4 billion euros. “A ‘contagion’ that hasn’t stopped despite what is taking place”, he added, “a ‘contagion’ that we have seen for ourselves last year during the meeting of the Federviaggio associations in Israel.”

A country that the director defined as “moving and exciting, one that offers a thousand types of tourism, from that aimed at the very young to the sports-minded, from cultural tourism to spiritual tourism, and not only linked to pilgrimage”. And a country that offers numerous investment opportunities.